"The prominent Hungarian social historian, Béla Tomka, has written an important book on socialist and post-socialist economies in Central Europe. His central tenet is that the traditional analysis of economic growth and living standards, which quantitative economic historians have undertaken, does not provide a complete picture of comparative economic development. Only by investigating what growth meant for ordinary consumers and households, can we understand the motives for modernisation and evaluate its societal impact. Austerities and Aspirations makes the ambitious attempt to assess the economic development of East Central Europe in a comparative perspective based on three dimensions of progress: growth, the standard of living, and consumption."
Link to review:
https://www.connections.clio-online.net/publicationreview/id/reb-50040
Reviewed book: 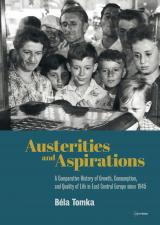