Comitatus: A Journal of Medieval and Renaissance Studies

"The title immediately refers to the economic and political significance of this Cypriot city, inhabited by Greeks, Franks, Italians, Syrians, and Arabs, because of its role as a trading hub in the eastern Mediterranean. The articles gathered in this volume are the result of an international symposium on Famagusta, Historic Famagusta: A Millennium in Words and Images, hosted at Central European University in 2012. While these investigations advance our knowledge of medieval and Renaissance Famagusta, they also reveal questions that require further inquiry, whether due to a lack of sources or the poor accessibility of some monuments. The authors and editors seem aware of the state of research on this historic harbor. The raising of unexplored questions—central to the understanding of this important site—is linked with an international campaign advocating greater engagement in Famagusta’s preservation. This book will primarily interest historians and art historians focusing on various aspects of the medieval and Renaissance Mediterranean, especially in the aftermath of the Crusades. At the same time, the individual chapters reveal newly discovered information and employ methodologies that are highly useful to scholars in other disciplines, such as economics, anthropology, and religious studies. Overall, this volume provides multiple interesting, thought-provoking articles that encourage fresh scholarship and conservation efforts for one of the Middle Age’s most significant, international harbors"
Reviewed book: 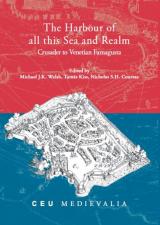