"The title of this collection accurately reflects the book's overarching emphasis: modernity as a goal for Eastern European cities, and for many of these cities, the race to develop a modern city, often a capital city. Following an excellent introduction by the editors, the essays divide into three parts. The first examines urban development to reveal the national aspirations and social turmoil of pre- and post-imperial Moscow, Kiev, Wilno, and Petersburg. The second examines Athens, Belgrade, Sofia, and Warsaw as new capital cities attempting to reflect the modern idea of centralized control over their new nations. Kaunas, Talinn, Riga, Helsinki, and Zagreb provide the background for essays that actively question the meaning of modernity in the urban capitals of the East. The authors' use of modernity as a cohesive theme is commendable. Modernity, however, has many different meanings, as revealed in the essays themselves. While all of the essays are in American English, most of the sources are (quite naturally) in a variety of languages. Summing up: Highly recommended"
Reviewed book: 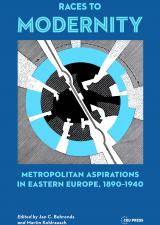