"The four medievalists represented in this volume belong to a generation of historians born in the first half of the twentieth century. The best definition of this cohort comes from the question: ‘what were you doing in 1945?’ Herwig Wolfram and František Šmahel (b. 1934) were still young children, János Bak (b. 1929) was a teenager, Jerzy Kłoczowski (b. 1924) already a young man. The few years that separated their dates of birth made a big difference in the course of their lives, but in another way, connected them to the various political changes that shaped the second half of the twentieth century in Central Europe where all four were born. In sum this is fascinating read and a profound insight into a generation of important medievalist historians who are now giving way to a generation unburdened by totalitarian and empowered by the new methodologies of the electronic age."
Reviewed book: 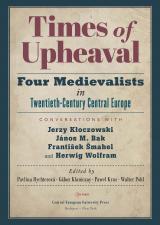