"This is an important volume for anyone who is interested in the economic cultures of post-socialist Eastern Europe, because it offers a rare wealth of empirical data as well as case studies on a large number of countries that were conducted using a consistent set of research questions and hypotheses. The qualitative approach, using “thick description” in the case studies, makes this book highly readable for non-economists as well. Its finding that Eastern Europeans in many cases actively influence and change the economic and institutional models imported from the west, creating new ones with various degrees of hybridization, should encourage economists, cultural scientists, sociologists and historians to further challenge the dominant narrative of Eastern Europeans who simply import their economic concepts from the West."
Reviewed book: 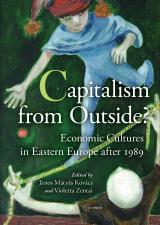