"The introduction to the book opens with a mise en scène from the early 1900s in which a British journalist expresses amazement with the many, often changing nationalities that inhabit the Balkans. The co-editors/co-authors, Theodora Dragostinova and Yana Hashamova, point to the paradox of such diversity owing to 'the stubborn inability of people [in the region] to recognize and share their common history and culture'. As the introduction ends, readers are poised to encounter fresh perspectives on how ethno-religious, linguistic, and national differences have been legislated, performed, enacted, and amended by subjects, citizens, and political parties, and from topdown and bottom-up political actors in empires and (nation-)states. Special attention is paid to processes of negotiation between religions and between official discourse and everyday practices as they expose 'the existence of alternatives and challenges to nationalism in the area'."
Reviewed book: 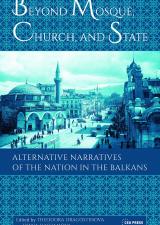