"The book contains a wealth of data gathered through ethnographic fieldwork conducted in different villages and towns of Transcarpathia’s Irshava District and/or Deanery. Fieldwork consisted of interviews with the Irshava Deanery’s Greek Catholic priests, with ‘members of church councils’ of the region’s villages and with parishioners as well as archival research and observation of pilgrimages organised by Transcarpathians, ceremonies commemorating the apparitions of Dzhublyk and various events that were organised in the region by the authorities of the eparchy (27–28). It will be of interest to anthropologists and historians working on the region and/or on pilgrimage and religion (Eastern Christianity in particular) and in postcommunist societies and beyond."
Reviewed book: 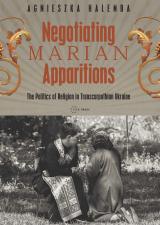