"In the countries of Central Europe, postcommunist politics turned out to be surprisingly subdued. ... This was not the only odd thing about the region. In another strange turn of events, in Hungary and Poland during the early 1990s, hundreds of thousands of people suddenly became disabled and retired or simply vanished from the labor market. … Pieter Vanhuysse, in his lucid and brilliantly argued slim book Divide and Pacify, shows how the second oddity goes a long way toward explaining the first one. By connecting two puzzles he solves them both. … Vanhuysse does not confuse clarity with reductionism. His explanation is neither overly deterministic—the Czech case shows that governments had choices—nor does it rule out other factors. … Anyone who wants to write a more complete history of the Central European transition will have to read Divide and Pacify … Vanhuysse's work is a major contribution to the study of the postcommunist transition, and as it builds its case by carefully marshaling evidence from sociology, political science, and economics with lucid prose, it speaks to a wide audience."
Reviewed book: 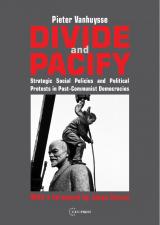