"It is hard to believe that there are almost no scholarly works on such an important and controversial figure. Therefore, the appearance of Jovan Byford's book is a welcome and timely contribution. A native of Serbia trained as a psychologist, Byford conducted interviews and drew on the secondary literature of his profession to create this unique study of the psychological operations behind the making of Velimirović's cult. Byford meticulously demonstrates the textual, rhetorical, and argumentative tactics employed by the promoters of Velimirović's cult to repress, deny, or justify Velimirović's antisemitism."
Reviewed book: 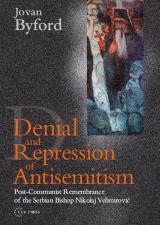