"Janowski has made an important contribution in analyzing the liberal thought of such figures as Karol Libelt (citing Benjamin Franklin—"Time is money"—in Poznan), Stanislaw Szczepanowski (analyzing the causes of Galician poverty), and Stanislaw Herburt-Heybowicz (who argued that the state should protect the nationality of the individual, but not the collective nation). There is a subtle analysis of the liberal views of such prominent literary figures as Boles^w Prus and Eliza Orzeszkowa. Janowski convincingly demonstrates not only the prominence of liberalism in the Polish lands but also the contributions of Polish writers to the general movement of European liberalism. Relating his work to contemporary politics, Janowski reminds the citizens of postcommunist Poland that they possess a powerful liberal tradition, and reminds us all that "Polish thought was much closer to the West than it is sometimes supposed."
Reviewed book: 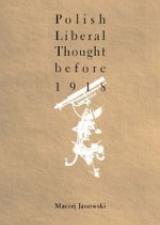