"The new research shows that we can learn were. The new insights include the role of religion and religious institutions, theological, political, and ideological changes within the Catholic world and the Soviet bloc, the complexity of international relations, spy networks, and more during a time of detente. Hungary, as Andras Fejerdy shows in Pressed by a Double Loyalty, had become a “testing ground” for new approaches and policies by both the Vatican and the Soviet bloc. Fejerdy’s thorough study is an important contribution to the history of religion and diplomacy during the Cold War."
Reviewed book: 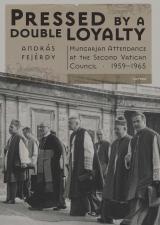