"The author’s chosen topic is important for several reasons. First, it is part of the international debate that has been going on for several decades over the specificity of Eastern Europe. Second, it provides the opportunity for an intriguing analysis of the polyphony of Polish historians. Third, this Warsaw sociologist’s considerations show that in the face of ideological pressure and official censorship, Polish scholars actively participated in international debate and made original contributions toward explanations for what is identified in Sosnowska’s title as Eastern Europe’s ‘backwardness’."
Reviewed book: 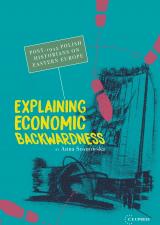