"According to conventional wisdom, fiscal contractions come with economic and political costs. Reduction in deficit is widely believed to have a negative short-term effect on economic growth and employment and, for that reason, to be politically unpopular. István Benczes's study is the first book-length treatment of the issue. It combines a critical survey of the literature with a quantitative analysis of fiscal adjustment in the pre-enlargement EU and an in-depth case study of Hungary, the EU country with the highest fiscal deficit in 2006."
Reviewed book: 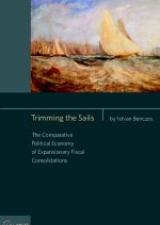