"Trust as a research topic in the social sciences has gained considerable importance in the past two to three decades. This book is not only valuable and relevant in the current economic environment, but also complements Gyõrffy’s previous research, which examined the effects of political trust on fiscal consolidations. The main objective of this research was to examine the heritage of distrust, inefficient institutions and unrealistic expectations indirectly, and to focus on the influences on the makings of economic policy. At the time, such scepticism proved to be unfounded as the process of accession to the European Union provided an anchor for policy-making. However, distrust persists following the EU accession, while the anchor is largely gone. Early fears of transition materialised two decades later and the problems associated with a low level of trust need to be addressed."
Reviewed book: 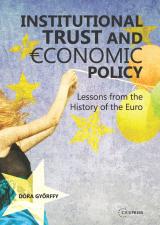