"Becker contributes to a growing body of scholarship on civil society and professionalization in Imperial Russia, arguing that rather than distancing themselves from the system, specialists engaged with, participated in, and supported the state’s reform efforts. In contrast to much of the literature on civil society and the intelligentsia in Imperial Russia that has focused on spaces of independence apart from the autocracy, Becker emphasizes the importance of the professionals’ relationship with the state. She argues that medical-legal professionals supported the state and its reform efforts, seeing their relationship with the state as essential for the development of their professional identity. Becker argues, forensic experts challenged the traditional hierarchies for conferring social status and authority, both undermining the autocratic system and creating the foundations for an independent medical profession. Additionally, Becker does a fine job of situating the developments in forensic medical practice in Russia within those occurring in the rest of Europe. Indeed, Becker finds that Russian physicians engaged in the debate over the status of forensic experts in the court system, and their treatment as expert witnesses, to a greater extent than their European counterparts. She concludes that through continuous procedural debates and adjustments, Russian forensic physicians were able to construct and define their own social identity, authority, and autonomy within, rather than apart from, the state apparatus. The book’s engagement with the relationship between professionals and the state, and its compelling contribution to those debates, mean that it should find an audience among those interested in issues of professionalization, forensic medicine, law, civil society, and reform in Imperial Russia"
Reviewed book: 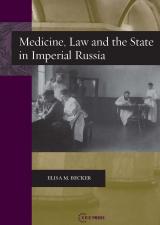