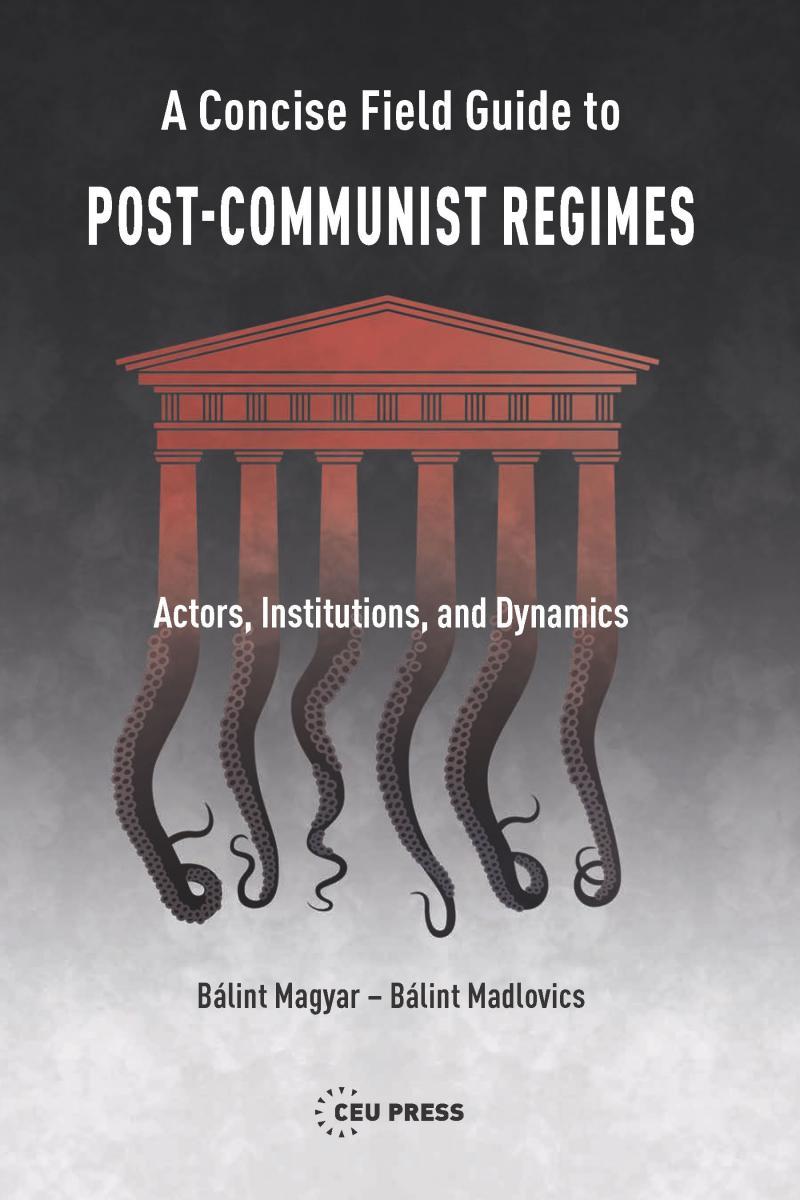 POSTCOMMUNIST REALITIES ACROSS A VARIETY OF CEU PRESS PUBLICATIONS

This compilation features books of the Central European University Press, published since its establishment in 1993, that have some relevance to the political developments in the post-communist region. After the latest release, titles in the backlist are arranged by content: contemporary topics are on top, older themes below. For more substantial information about the content and availability, please click on the covers of the book, or on the links inserted into the citations.

“The tragic events in Ukraine must compel Western observers to seek a more authentic language, words, and concepts that can explain the post-communist world, its peculiarities, and tendencies. The conceptual framework, presented here in 120 short propositions, provides just such a language”—from the foreword by Oleksandr Fisun, Kharkiv University.
A Concise Field Guide to Post-Communist Regimes is a concise companion to the 800-page The Anatomy of Post-Communist Regimes (CEU Press, 2022.
"Reading this book feels like having the curtains opened, letting the bright light come in. Everything becomes visible and clear. The experience of living in mushy political reality gives way to unsparing, exact analysis. What comes into focus may not be pretty, but having it illuminated, ordered, and explained is incomparable."—Masha Gessen, Staff writer journalist, The New Yorker

“A tycoon in the Balkan or Serbian context is closer to Carlos Slim or Roman Abramovich than to Bill Gates or Richard Branson.”—The Moneywasting Machine.
“Fiat received a bonus of €1,000 for every car produced. In 2013, the European Commission requested to remove this. Fiat and the Serbian government made a fictitious contract under which the same amount would be paid to Fiat for additional jobs. However, Fiat was not obliged to hire all these workers; it only had to create the positions.”
“We quickly realized that no one in the Serbian government was interested in reducing party patronage. Quite the opposite: it remains one of the most extractive institutions of the Serbian political institutional design.”
“I have tolerated all obstructions and the irresponsibility of the public companies. After all of this, it makes no sense to remain in the cabinet.”

“It is in Russia’s interests to push Donbas back to Ukraine. Yet Putin cannot ignore the Donbas population’s natural enmity created by Ukraine’s massive shelling. Russia’s broadcasting media creates the Russians’ sympathy for their Donbas brethren, which cannot be ignored by Putin, either.”—The War in Ukraine’s Donbas.
“Enemy dehumanization mechanisms, speaking of the enemy using hate speech, the memory of personal and collective losses record the conflict and block potential peace initiatives.”
“Despite the positive effects that elections have in a post-conflict environment, the ‘rush to the polls’ can also reinforce existing divides and raise doubts about the fairness of the process.”
“Weak international response and successful implementation of the ‘Kerch operation’ as well as pressuring Ukraine in the Sea of Azov may be assessed as a large tactical regional success for the Kremlin. However, the Ukrainian lesson should become a stern warning for NATO members, especially Romania, Bulgaria, and Montenegro.”

“Instead of taking democracy as a starting point from which the Orban regime has been deviating, we will follow the dynamics of evolution and self-reproduction of a centralized authoritarian system.”—Dynamics of an Authoritarian System.
“The book empirically follows the evolution of political capture and its diffusion as a centrally managed network. It explores over 700 individual and governmental decisions and events between 2010 and 2021 to illustrate this process.”
“The next case study, using data from more than 242,000 public procurement tenders, analyzes corruption risk and the intensity of competition of public tenders from 2005 to 2021.”
“Between 2014 and 2020, Lőrinc Mészáros, Orbán’s friend from his village, acquired 300 enterprises.”
In the Prime Minister’s words: “What has happened and is happening in Hungary cannot be expressed in the liberal language of Brussels Euro babble.”

Postcommunist variations in CEU Press backlist, from the general through the comparative to particular cases:

“Scholars introduced the concept of a permanent ‘grey zone’ between democracy and dictatorship: hybridology is clearly a positive step from transitology.”— The Anatomy of Post-communist Regimes.
“The separation of political, market, and communal activities is peculiar to Western civilizations. The lack or rudimentary level of separation of these spheres is the basic reason why post-communist regimes should not be treated automatically as if they were Western.”
“Attempting to explain the driving forces of postcommunist rulers from nationalism or religious values is as futile an experiment as trying to deduce the nature and operations of the Sicilian mafia from local patriotism, family-centeredness, and Christian devotion.”
“This conceptually highly innovative analysis provides terms and theories that are crucial for making sense of our historical moment.”—Jan-Werner Mueller, Princeton University

"Despite the new euphoria that marked the downfall of communism, the Leninist debris remained stronger than all but a few had dared to imagine. Cynicism, dogma, xenophobia, nationalism, imperialism, and the search for unity and purpose continued to underlie the post-communist societies, even in the happiest of times."—One Hundred Years of Communist Experiments.
"Post-communist reforms strengthened the grip on resources by parallel economy dealers and corrupt bureaucrats, politicians, and bosses of organized crime affiliated with them. The starkest example is presented by the so-called 'voucher' privatization, at the time touted as one of the most 'successful' among post-communist economies."
"The existing evidence suggests that life in post-communism should be considered an improvement over life under communism. Yet, opinion polls reveal surprising nostalgia for communism. We now have access to data series and to the subjective views of several generations of Eastern Europeans who experienced both communism and post-communism."

“With the annus horribilis of 2016 (Brexit, Trump, defeat of the reformatory left in the Italian constitutional referendum), we have entered a new era. The West as a relatively homogeneous ‘community of values’ has ceased to exist.”—from a bunch of most stirring responses to the inquiry of the Eurozine online magazine about the current state of East-West relations.
“It was the attraction of western consumerism more than that of western liberalism that decided the outcome of the Cold War. Human rights were certainly present in ’89, and very important for legitimizing it.”
“The Czech Republic integrated into the EU, but Czech elites considered the English-speaking world, especially the United States, to be the ‘real’ West. It was here that neoliberals found ideological and material inspiration.”
“The West indignantly points to the illiberal East that supposedly bites the hands that fed it; thereby conveniently overlooking its own responsibility in stabilizing autocratically-minded leaders.”

“The present volume represents a major step forward in the effort to understand postcommunist politics in ways that escape the procrustean bed of theory oriented primarily to the democratization research agenda.”—from the Introduction to a comparative analysis of post-communist regimes.
“Understanding postcommunist politics is well served by a framework that builds from the ground up—proceeding from a fundamental social context that these countries share to varying degrees—as opposed to concepts derived from a vision of what these countries might become. This context is patronalism.”
“Magyar systematically introduces a completely new grammar developed specifically to convey understandings about postcommunist politics that our existing lexicon and linguistic norms miss or tend to distort. The bulk of Magyar’s chapter is devoted to creating a new terminology for understanding politics when the separation of the political, the market, and the communal is unrealized.”

“More often than not, public service television is a means of money laundering and illicit party funding. The high costs, low audience ratings, and lack of legitimacy suggest that closing down this institution should be considered.”—Up in the Air?
“Bosnia failed with respect to all of the core elements of a public service media system: independence, remit, and, as we will see, the funding and adoption of new technologies as well. It is now closer than ever to collapse.”
“Hungary, a success story of media transformation and political democratization until the mid-2000s, compares to date with the Balkan countries, rather than its geographic peers such as Czechia and Slovakia.”

“The parties of the left in Poland committed themselves to neo-liberalism, leaving a political vacuum in a most sensitive place and it is not surprising that eventually somebody has moved into this vacuum: an ultra-nationalist, highly conservative, traditionalist party.”—Poland in a participant observer's eyes.
“The Covid crisis has made many people aware of the weakness of the EU, as well as the key role played by the nation states - Kaczyński said in April.”
“On the one hand, PiS presented itself as the most uncompromising opponent of communism and its legacy, but on the other hand, many described the resurrection of the Polish People’s Republic.”
“The Left seemed to be stuck in permanent limbo between cynical ex-communist apparatchiks and trendy neo-Marxist thinkers. It embraced the Rainbow Formula of minority rights and lost much of the support it may have had among the working class. The building of a mass movement would require a vision that took PiS’s strategy seriously and understood shifting class dynamics.“

“Perhaps PiS was just faster than its rivals in understanding its electorate. Perhaps Poland was simply reverting to type. Wasn’t this New Normal a lot like the Old Normal—in other words: insular, conservative, xenophobic, and statist?”—from a book on current Polish politics.
“Kaczyński has two different visions of international relations, one for the West and one for the East. In relations with the West, Poland is the subject of economic and political subordination that limits its sovereignty. With regard to the East, the approach is characterized by a liberal or even an idealistic attitude.”
“The economic policies of PiS regarding banks, foreign investors, wind power, energy, and Russia and its fight with the European Commission all play into the narrative of Polish exceptionalism.”

“Within a year of the election, the Law and Justice government transformed the public media model for radio and television back into channels which, even more openly than in the last decades of communism, parrot the rulers’ lines.”—from a book on current values in Poland.
“‘I survived Nazism, I survived communism, I will survive genderism, too.’ This statement reflects the conviction of a large portion of the episcopate that ‘genderism’ is a new aggressive ideology, comparable to Nazism or communism not (yet?) in its disastrous effects, but in its total character and revolutionary implications.”
“The majority of Poles have no issue with religion in schools, religious symbols in public places, priests at state ceremonies or on TV, and being informed by the Church hierarchy on moral issues.”

“The Ukraine crisis—despite some of the official rhetoric about Russia’s ‘national interest’—was much more than a clash of rationally calculated and rationally understood interests. It was a more fundamental clash of different realities whose growing discrepancy had apparently been overlooked.”—from a book on how Russia is being constructed as a supranational entity.
“Discrepancy between the formal borders of Russian Federation and the lingering Russian geopolitical imaginaries produces what is sometimes called ‘phantom pains,’ a kind of hypersensitivity about former imperial territories.”

“The new Hungarian regime is built upon the ‘rule by law’ instead of the principle of the rule of law”—from the volume that attempts to explain populist nationalism, understood as the prioritization of the nation, historical argumentation and cultural particularism in the framing of public discourse.
“Nearly all of the provisions inserted into the Fundamental Law by the Fourth Amendment have been previously rendered unconstitutional by the Constitutional Court. By overriding them, the parliamentary majority reserved the right to have the final and supreme authority on the Constitution’s meaning.”
“Rising political populism does not stem from the lack of civic associationalism per se but rather from the fact that civil society has also become a hotbed of right-wing radicalism.”