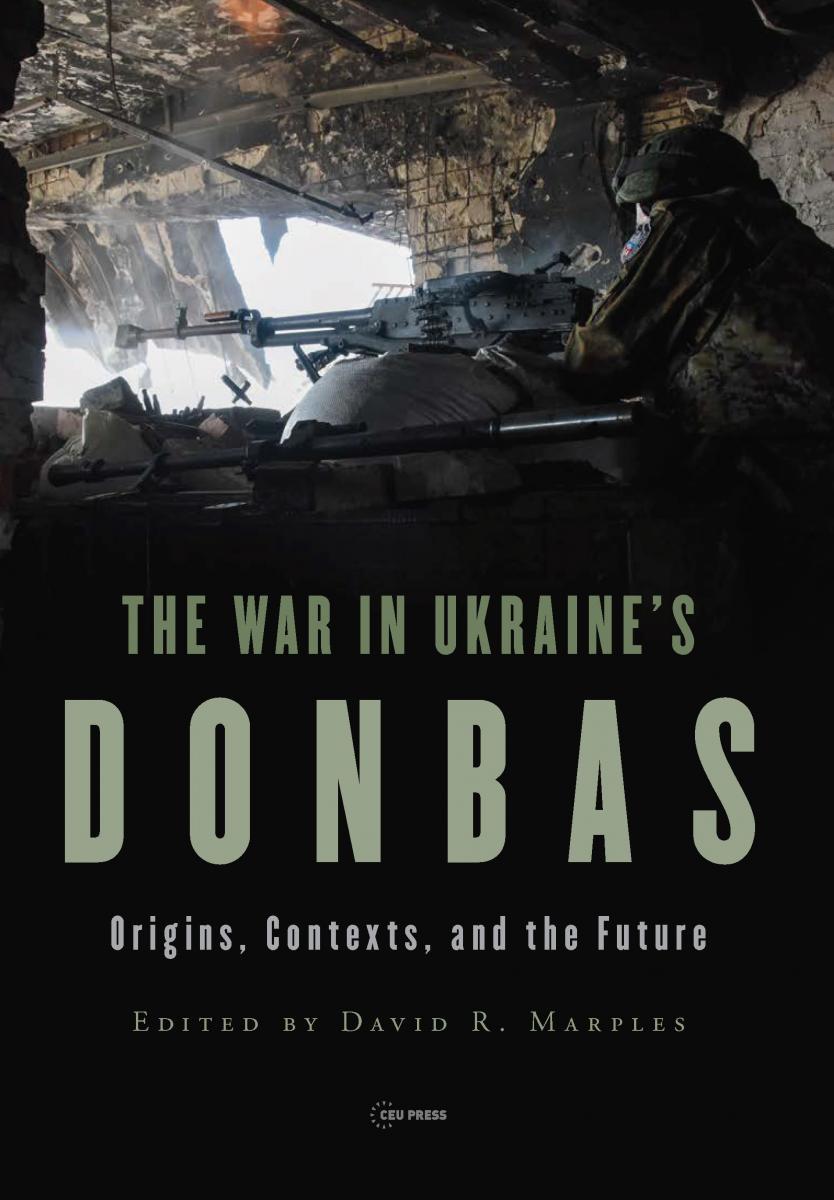 MOLDOVAN THEMES ACROSS A VARIETY OF CEU PRESS PUBLICATIONS

This compilation features books of the Central European University Press, published since its establishment in 1993, that have some relevance to Moldova, its history and culture. After the latest release, titles in the backlist are arranged by content: contemporary topics are on top, older themes below. For more substantial information about the content and availability, please click on the covers of the book, or on the links inserted into the citations.

“As the examples of Transnistria and South Caucasus have convincingly demonstrated, artificially created ‘gray zones’ could become an effective deterrent on the path toward deeper integration with Euro-Atlantic blocs.”—The War in Ukraine's Donbas.
“Any internationally unrecognized status is unacceptable for Odesa oblast. The closure of the port means death for this city and region. The Odesites learned this lesson from Transnistria’s quarter-century of isolation and suffering.”
“The idea of a new asymmetric concept was based on the work of Russian and Soviet military theorist Aleksandr Svechin. After the collapse of the USSR, the Russian Federation continued to work in the same direction by testing (quite successfully) her capabilities in Moldova (in the unrecognized state of Transnistria).”
“The so-called Cossack National Guard—headed by Ataman Nikolai Kozitsyn, who in his own words took part in conflicts that broke out in Transnistria, Abkhazia, and Ossetian-Ingushetia—took control of the city of Antratsyt.”

“In Bessarabia, Moldavian and Russian were kept apart, the former written and printed in Church Cyrillic, while the latter in Peter the Great’s early 18th-century Grazhdanka.”—Words in Space and Time.
“In 1924 the Cyrillic-based Moldavian was back to official use in the Moldavian Autonomous Soviet Socialist Republic, proclaimed on the Soviet frontier with Romania, on the eastern bank of the Dniester.”
“After the war, it soon turned out that the Dniester dialect was hard to understand for many Romance-speakers in the Moldavian SSR who had lived and received their education in interwar Romania. As a result, in 1951, it was decided to make the dialects of central Moldova into a new dialectal basis of Moldavian. In this way, Moldavian became much closer to Romanian.”
“If the Moldovan nation was defined in ethnoreligious terms as the Orthodox Christian faithful of the Metropolis of Chișinău and All Moldova (irrespective of language), then it would be a perfectly homogenous nation-state.”

A book with a Moldovan focus:

"The ’Bessarabian Question’ was one of the thorniest but least-understood problems of nineteenth- and twentieth-century diplomacy in Eastern Europe. In this erudite, deeply researched, and sensitive account, Andrei Cusco shows how both Romanian and Russian imperial interests intersected in this small but much-disputed borderland. In its level of detail and eloquence of style, Cusco's book is unmatched as a study in the limits of diplomacy, the origins of nation-building, and the travails of empire-maintenance." - Charles King, Georgetown University
“In Eminescu’s hierarchy of ethnic dangers, the Slavic element clearly took precedence over any other group, including the undoubtedly oriental but essentially harmless Turkish and Tatar populations of Dobrogea. The tendency to view the Bulgarian (i.e., Slavic) inhabitants of the region as a major threat prompted him to exonerate Dobrogea’s Turks and Tatars from the stigma of “savagery” prevalent in the discourse of opposition Liberals.”
“Invoking the legal guarantees that were introduced in the legislative acts confirming Bessarabia’s autonomous status and deploring its subsequent liquidation, Constantin Stere uses the metaphor of the ordeal to define Bessarabia’s regression from an emancipated to an annexed country subjected to a yoke a thousand times crueler than that of the Ottomans.”

Other titles from the backlist, contemporary topics on top, older themes below.

“Plahotniuc never reached a position higher than First Deputy Speaker of the Parliament. Yet he assembled a single-pyramid patronal network with the informal means of kompromat and state capture: managed to patronalize the Democratic Party of Moldova, the Constitutional Court, and the chief prosecutor. ”—The Anatomy of Post-communist Regimes.
“Plahotniuc, whose party in the 2014 elections won only 19 seats out of 101, turned to MPs from other parties and started to ‘buy them up,’ that is, to bribe them into supporting his party, to secure eventually a majority.”
“Running the state as a criminal organization, the chief patron risks persecution and going into prison if he loses. In the post-communist region, we may mention three notable examples: Yanukovich, Gruevski, and Vladimir Plahotniuc, who fled the country with his patron’s court in face of strong international pressure.”

“Unlike the situation in many other highly corrupt countries, Moldova’s network is not dominated by a chief of state. Plahotniuc holds no government office, but from outside official institutions has managed to stack government structures with either his cronies or individuals too weak to threaten his operations.”—Stubborn Structures.
“In 2015, a very significant chance was wasted. The demonstrations were the first time in Moldova’s independent history that the different language communities came together. Unfortunately, important external actors, mainly the Romanian and US governments, disagreed: due to their misplaced fear of Russian geopolitical gains, they essentially continued to support mafia rule against the noble aspirations of the people.“
“Plahotniuc critically lacks legitimacy and popularity. If he undertakes the necessary reforms to accelerate economic growth, it would reduce his rentseeking opportunities.“

Discussing the behavioral dimension of the patterns of new Jewish identity in Moldova.

“Moldova acquired a special status once Romania itself was Sovietized in the sense that the Soviet Union had to develop policies that could institutionalize and consolidate sharp distinctions between the populations of the two communist countries. The result was strong cultural, social, and economic discrimination of the ethnic Romanians in Moldova.”
A volume that offers a rich panoply of remembrances of the communist era.
“In Moldova, because of its specific history within the Soviet Union, the process of coming to terms with the past is in danger of being ethnicized, as either Romanians or Russians often tend to claim a monopoly of victimhood.”

Gorbachev, July, 1991: “We need the Union. This new government will have new terms of reference. As for the other republics, some will hold their own referenda, e.g., Armenia, Moldova, even Georgia. A large majority are for union. Even their polls show 70–80% in favor of a new union.
When Moldovans started talking about joining Romania, the population of one-third of its territory immediately objected, they do not want to leave.”
From the edited records of the American and Soviet leaders’ last face-to-face meetings.
Brent Scowcroft, October 1991: “Power is quickly flowing away from Mikhail Gorbachev. His effort to create a voluntary economic union has produced a vague agreement to set up a ‘commonwealth’ based on 27 other yet-to-be-negotiated agreements. Even that vague agreement has failed to attract Ukraine, Azerbaijan, Georgia or Moldova.”

“Due to a prolonged decay in their intellectual and cultural life, by the end of the ‘old’ period the Ruthenians of Moldavia had found themselves in a condition characterized as a dense murk of ignorance.”—from a book on regional specificities in Ukraine.
“In Chernivetska oblast, in 1941 most schools (458) offered education in Ukrainian, with other languages of instruction being Moldavian (in 149 schools), Russian (15 schools), Yiddish (12 schools) and Polish (2 schools).”
“In 1941-44, the Romanians had some indulgence for Russian, for example in Odesa, but in Bukovyna and Bessarabia, it was their resolute belief that only Romanian should reign supreme.”
“95% of those inhabitants of Chernivetska oblast who identified themselves as Moldavians indicated Moldavian as their native language in 1989. By contrast, in Odeska oblast, including Budzhak, the degree of language maintenance by the Moldavians was lower (79%); instead, 15% of them claimed to speak Russian, and 5% Ukrainian as their native language.”

“Romanian communists were banned in 1924. This triggered an unprecedented radicalization in the position of the pro-Soviet communists, culminating with the peasants’ armed rebellion at Tatarbunar (in Southern Bessarabia), the declared objective of which was to put an end to the Romanian occupation in Bessarabia.”—from a book on intellectuals and the totalitarian temptation.
“In the eyes of the Romanian public Antonescu soon became the symbol of the struggle against communism and the Soviet Union, as well as of the general aspiration for a Romanian recovery of Bessarabia and Northern Bukovina.”
“Antonescu sent a telegram in July 1941 to Governors of Bessarabia and Bukovina, calling upon them ‘to secure the cleansing of the terrain from the communists, the removal of Bolsheviks, of unreliable elements, of Jewish provocateurs, and the removal of Jews residing in villages.’ As the orders were passed down the chain of command, this operation ballooned into carnage of genocidal proportions.“

“Kapodistrias and his secretary and friend A.S. Sturdza in the summer of 1812 based the provincial government on local laws and made Romanian the language of administrative affairs and the courts.”—Russia on the Danube.
“By 1816, administrative chaos and the abuses of officials in the newly acquired province placed the ambitious visions of 1812 on the verge of total failure. Kapodistrias explained this by ‘the vices characteristic of this country that had so far received only a Moldavian, that is, Turkish, upbringing.’”
“Vorontsov proceeded to curtail Bessarabian autonomy. To start with, the viceroy fired the whole police department, and appointed completely different people in their place. Finally, Vorontsov energetically advanced plans for the further colonization of the southern part of the province by Serbs, Cossacks, and state peasants.”
“The failure of the Bessarabian experiment necessarily increased the skepticism of tsarist officials toward the Moldavian and Wallachian elites in general.”

“In Moldavian eyes, the Ottoman Other was strange and resentful, ‘just like dirty water,’ as chronicler Macarie puts it in a creative metaphor of repulsion towards the sultan’s subjects.”
A collection of studies proposes a new cultural history of the early modern coexistence of various communities.
“Pope Sixtus IV named Stephen the Great verus christiane fidei athleta, the true champion of the Christian faith.”
“Peter Rareş, always aided by the bishop and chronicler Macarie, developed Stephen’s artistic program and applied it to the exterior walls of the monasteries. These decorations not only supported the liturgical process but also could be interpreted as symbols of attitudes in 16th century Moldavia.”
“The reasons for Elijah Rareş’s conversion remain uncertain. Most likely, the Ottoman lifestyle impressed him and he consequently brought it to his court in Suceava.”
“Stephen Rareş was likewise a controversial ruler. From the second day of his reign, he began persecuting mainly Armenians but also Ottomans, Hungarians, and non-Christians generally.”