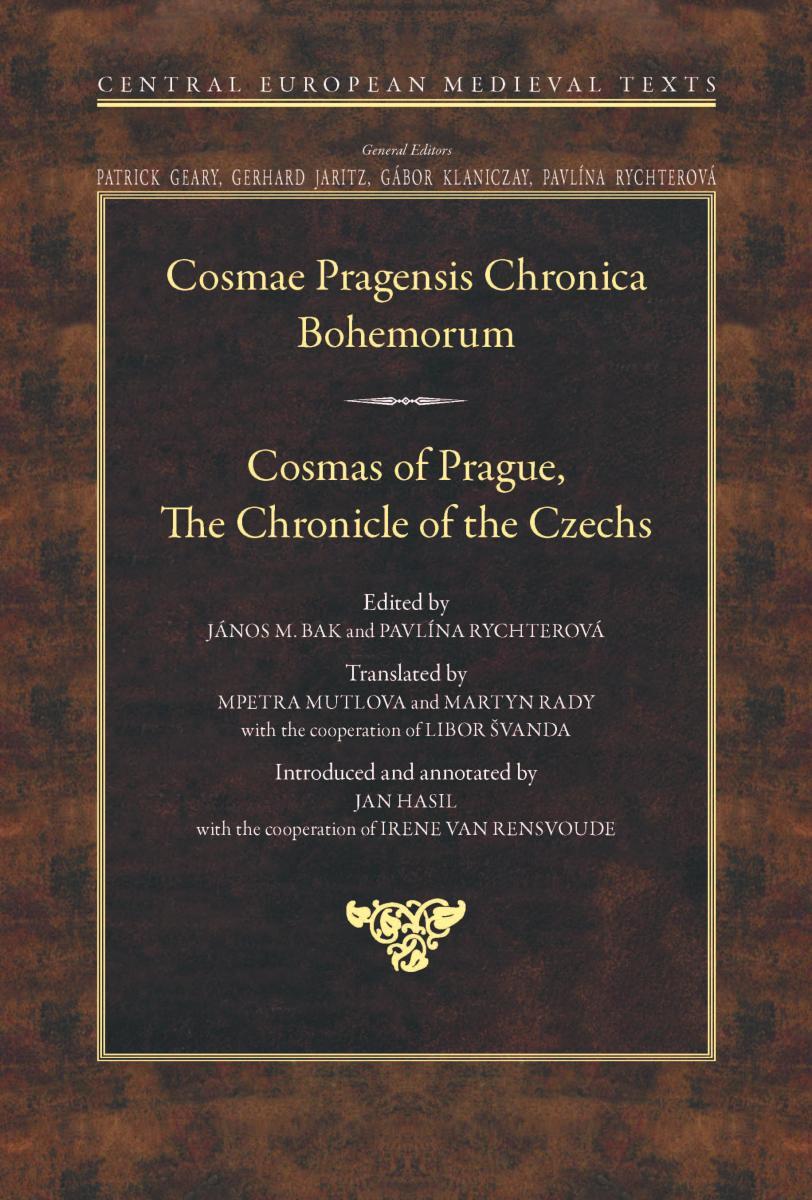 MEDIEVAL THEMES ACROSS A VARIETY OF CEU PRESS PUBLICATIONS

“I know there will be some jealous people and that they will die of derisive laughter when they see the scope of this project. They were taught only to criticize others, while they themselves know nothing good to present.” (Scio nonnullos affore emulos et eos emori risu subsannationis, cum viderint scema huius operationis; qui tantummodo docti sunt aliis derogare et ipsi per se nihil boni sapiunt erogare.)—from The Chronicle of the Czechs.
The work by Cosmas has withstood jealousy and contempt across the centuries. This bilingual annotated edition is the product of a larger team of scholars than any of the previous publications in the Central European Medieval Texts program.
“May all faithful in Christ know that the author of this chronicle, the most reverent Cosmas, dean of the church of Prague, has died.” (Noverint omnes in Christo fideles huius chronice compositorem scilicet Cosmam reverentissimum Pragensis ecclesie decanum obisse.)

Princess Piroska turning Empress Eirene: how the Hungarian king’s daughter became a Byzantine empress, a powerful mother and pious wife.
“We know her appearance from her portrait in Hagia Sophia and her piety from the foundation of the Pantokrator Monastery. In the portrait, she is depicted with her husband John II Komnenos. John holds the moneybag, while she holds a scroll that records their donation.”—from the concluding remarks of the book that describes the story of today’s Zeyrek Camii in Istanbul, founded as the Pantokrator Monastery in Constantinople.
“She established a monastery in the name of the Pantokrator, which is among the most outstanding in beauty and size. Such was this empress.”—quoted from to a contemporary chronicler.

Extensive conversations with four masters of medieval studies from four countries who were born in the late 1920s or early 1930s, in a volume edited by the four junior scholars who interviewed their senior colleagues.
“Nationally defined historiographies only started to change dramatically after World War II, when historians faced great challenges in both democratic and Soviet-controlled Europe.”
“How Kłoczowski, Bak, Šmahel, and Wolfram experienced the long shadows of totalitarian regimes with their acute sensitivity for historical change, and how their perceptions of the world around them led them to reflect on their approaches to medieval history.”

Suleyman in the eyes of Hungarians, the strangling of Sehzade Mustafa on the English stage, the Pope's call for the conversion of the Sultan, multicultural Algiers depicted by a Christian prisoner and other experiences of coexistence.
"The essays in this book deal to a large extent with images, representations, projections, and perceptions based on various experiences of coexistence. As examples of practices in diverse historical contexts, the book includes a variety of textual material, such as literary productions, rhetorical exercises, dramatic applications, chronicles, epistles, and diarytype historical accounts with ethnographic sensitivities. Supported by a thorough research apparatus, these studies propose a new cultural history of the early modern coexistence of various communities, as identified in current research by young scholars."

“Early modern urban discourse is a daunting subject, especially when one considers that much has survived from the enormous corpus of writing about cities from the later Middle Ages on.”—from the introduction of the book on what and how late medieval and early modern citizens wrote about their cities.
“The thirteenth and especially fourteenth centuries witnessed a notable increment in the amount of urban discourse, produced and recorded on parchment or paper, and consumed through reading. This was true especially of Italy, and of the German and Dutch-speaking lands to the north.”
“The urban historian has to comb carefully through a great deal of writing on cities in order to piece together any sort of working consensus on what made for a beautiful one in particular.”

“Astrology was one of the most widespread types of cosmic order ac­cepted among intellectual elites of the Middle Ages. The celestial movement of astral bodies was considered influential in sublunar events, including the time of the End and redemption.“
From a collection of essays on the apocalypse.
“In the aftermath of the First Crusade, over the course of the twelfth century, crusading became firmly linked to the apocalyp­tic imagination of medieval Europeans.”
“The bishop of Winchester hoped that the arrival of the Mongols would somehow transform the status of Christendom in the world, leading to a universal Christian order that would precede the end of time.”

Prepared (written and illuminated) in the fourteenth century, probably in Bologna, dispersed in two continents, four countries and six collections; many of its pages cropped, cut into four, or lost forever; its history, origin, commissioner and audience are obscure; still, in its fragmented state it presents fifty-eight legends in abundant series of images, on folios fully covered by richly gilded miniatures; one of the most significant manuscripts of the medieval Hungarian Kingdom - these are all what we call the Hungarian Angevin Legendary.
The largest part of what remained of the codex was bound together in the eighteenth century in a volume housed in the Vatican Library. Some of the missing pages, often incomplete, have resurfaced in different parts of the world only to disappear again, finding their way into collections from the United States to Russia. Their common origin has only been discovered in the course of modern research. For today's observers the primary role of the surviving codex pages is to illuminate the way people in the fourteenth century viewed the saints they revered.

“Illuminated chronicles proper should be called those manuscripts in which the pictures are not merely occasional illustrations added to some exemplars, but where text and image are closely connected and mutually related to each other. The earliest example would be the panegyrical rhymed chronicle written and illuminated for Emperor Henry VI about the Hohenstaufen conquest of Sicily by Petrus de Ebulo (c. 1196). A new epoch of illuminated chronicles begins with the 1370s. The opener of this age is the Illuminated Chronicle from the late 1360s.” – From the introduction to the ninth volume in the bilingual series of Central European Medieval Texts.

“There is no doubt that the Illuminated Chronicle is one of the most precious items—if not the most precious one—of book art from the medieval kingdom of Hungary. The whole volume with its evenly written, richly gilded and painted folia on which text, miniatures and initials display a balanced rhythm is a unique work of art that offers a real delight when one takes it in one’s hand. It is a codex of medium size with well legible writing that can be held like a modern printed book and paged through with ease. The Illuminated Chronicle does not primarily call for reading but looking. It is as if the pictures were signs to the viewer to look into the text for the explanation of their contents.” – From one of the eight studies written on the Illuminated Chronicle.

“Considering the hairshirt she wore of little value, she had prepared for herself hedgehog skins three or four fingers wide. She girded herself with these, putting all of the spines on the skins next to her naked flesh.” (Nam cilicium, quo utebatur, parvi pendens pelles ericinas, secretius sibi parari fecit trium vel quattuor digitorum latitudine et universisa spinis pellium circa carnem ipsam nudam seipsam cinxit eisdem.)
The seventh volume in the bilingual series of Central European Medieval Texts contains a collection of documents born during the seven centuries that passed between the Hungarian royal princess Margaret’s premature death and her canonization. The hagiographic corpus—Latin texts with English translation—begins with the Oldest Legend from 1275-1275 and ends with documents of the fifteenth century canonization attempt.

Knights not only fought in battles, but also moved in sophisticated courts. Knights were interested in Latin classics, and reading, and writing poetry. These lettered warriors, while improving their culture, learned to repress their own violence and were initiated to courtesy: selective language, measured gestures, elegance in dress, and manners at the table. Their association with women, who were often learned, became more gallant. Related with the Twelfth-Century Renaissance, an essential intellectual movement for western history, lay elites, in contact with the clergy, began to use their weapons for common welfare. This new conduct was a tangible sign of medieval society's leap towards modernity.
This monograph - which was very well received when originally published in France - examines the attitudes towards learning and written culture among members of the nobility in different parts of Europe in the Middle Ages.

The long twelfth century, from the seizure of the throne by Alexius I Comnenus in 1081, to the sack of Constantinople by the Fourth Crusade in 1204, is a period recognized as fostering the most brilliant cultural development in Byzantine history, especially in its literary production. It was a time of intense creativity as well as of rising tensions, and one for which literary approaches are a lively area in current scholarship.
This study focuses on the prose dialogues in Greek from this period and on what they can tell us about the society and culture of an era when western Europe was itself developing a new culture of schools, universities, and scholars. Yet it was also the period in which Byzantium felt the fateful impact of the Crusades, which ended with the momentous sack of Constantinople in 1204.

Lives, identities, cults, landscapes and tombs – it is in this arrangement that the memories of the transition from paganism to Christianity are discussed, based on latest archeological discoveries from the last centuries of the Roman Empire.
Most of the essays subscribe to a conception of smoother processes than the earlier scholarly consensus. Such a paradigm shift in the interpretation of the relations between ‘pagans’ and ‘Christians’ attempts to replace the old ‘conflict model’ with a subtler, complex approach by triggering new explanatory models such as multiculturalism, cohabitation, cooperation, identity, or group cohesion.

"Martyrdom is one of the most controversial and incomprehensible phenomena of early Christianity. Our feelings about this can be very different: we may admire the unbending courage and heroism of the martyrs or be irritated by their stubbornness, or even feel disgusted at the fanaticism with which they strove for death. But whatever our feelings may be, we must admit that a very strong motivation is needed to accept voluntarily or even seek death."
"In this study I shall argue that martyrs are actual and not 'metaphorical' sacrifices and, consequently human sacrifices, since those who die in this way are human beings. Therefore, I shall try to interpret the sacrificial character of martyrdom on the basis of its relation to ancient human sacrifices. My argumentation will be based on the idea that human sacrifices, which originally were addressed to the divinities of nature, being connected subsequently to the paradigm 'to die for' were transformed into voluntary sacrifices and survived under this form in Jewish and Christian martyrology."

Further titles on medieval themes on the backlist of the Central European University Press:

Some of the older titles are out of print, nevertheless bookshops or online distributors may get you print-on-demand copies, and all CEU Press titles are sold in digital version at the major electronic distributors.