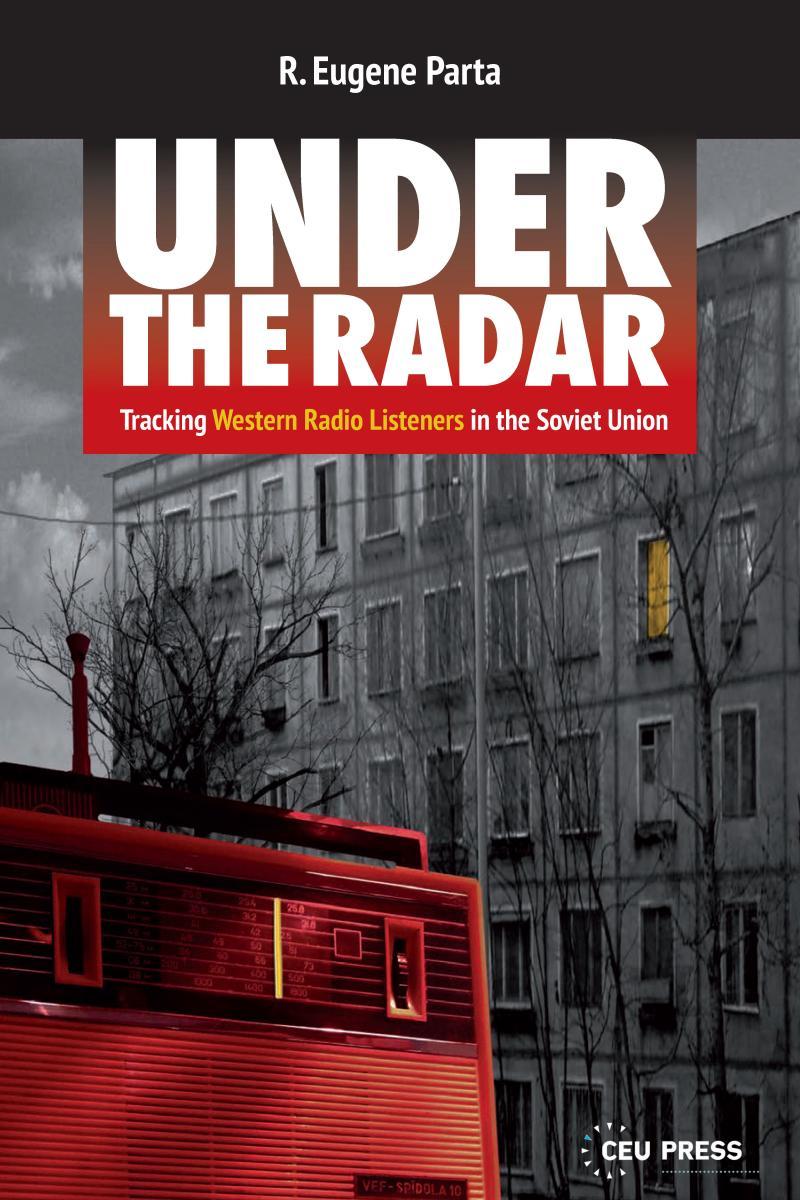 ISSUES OF MEDIA ACROSS A VARIETY OF CEU PRESS PUBLICATIONS

This compilation features books of the Central European University Press, published since its establishment in 1993, that have some relevance to the media, with special regard to the post-communist region. After the latest release, titles in the backlist are arranged by content: contemporary topics are on top, older themes below. For more substantial information about the content and availability, please click on the covers of the book, or on the links inserted into the citations.

„In the early 1970s, Radio Free Europe and Radio Liberty were threatened with closure. We expanded interviewing of Soviet travelers to the West and ultimately accumulated sufficient data to produce our first reliable estimates of audience size,”—Under the Radar.
„After twenty years of informal interviews, we were finally able to use conventional Western survey research interviewing methods! In September 1990 I made my first ever trip to the USSR to observe focus groups in Moscow.”
„With the help of travelers, émigrés, and letter writers, Parta and his group of Paris-based researchers compiled a portrait of their audience which enabled Radio Liberty to tailor its broadcasts to their concerns and become one of the most important contributors to America’s victory in the Cold War.”
„Parta’s book serves as an all-important guide and inspiration for a new generation of researchers who must grapple with ever evolving technologies, audience fragmentation, social media, and Russian disinformation campaigns and cyberattacks.”

“In a liberal democracy, the essence of discussing means the upholding of four media rights: right to know, to speak, to choose, and to connect.”—A Concise Field Guide to Post-Communist Regimes.
“In the Putin and Orban regimes, the use of state and governmental media for campaigning constitutes illegal campaign funding.”
“Gusinsky and Berezovksy were forced into exile, giving up their media empires to Putin’s patronal network. The opposition protesters are criminalized in the patronal media that dominate the Russian sphere of communication.”
“While the people nominally have access to the internet, the so-called ‘Great Firewall of China’ implements many different types of censorship and content filtering to control the country’s internet traffic. Experts have already described China as a ‘surveillance state’ and a ‘digital totalitarian state’ because of its newly developed, big data-based systems of internet control.”

“More often than not, public service television is a means of money laundering and illicit party funding. The high costs, low audience ratings, and lack of legitimacy suggest that closing down this institution should be considered.”—from Up in th Air?
“Ideally conceived to be a means of conflict manage­ment among different social and political groups via dialogue, public service television has come to reflect, and possibly to enhance conflicts. It not only mirrors, but may also deepen, the existing social, political, and ideological cleavages.”
“In 2012, the European Broadcasting Union published a declaration on the core values of public service media that emphasize key features of the classical Western model. Each of these proposed intrinsic values is problematic in Eastern Europe.”
“Hungary, a success story of media transformation and political democratization until the mid-2000s, compares to date with the Balkan countries, rather than its geographic peers such as Czechia and Slovakia.”

Books from the backlist, focusing on the media:

“What really emerged is similar to an ‘atavistic’ media system that is ‘colonized’ by political parties—a phenomenon common for many post-communist societies.”
Assessing the international media assistance in the Balkans.
“International media assistance to the Western Balkan countries failed to reduce the overreliance of local media on potentially compromising subsidies.”
“Institutions that were reformed more radically and rapidly due to external assistance witnessed a fiercer backlash once they were integrated into the local legal and institutional context.”
“A successful element is the integration of local media supervisory authorities into European networks of peer institutions.”

More titles from the backlist, contemporary topics on top, older themes below:

“I decided to write some notes about The Guardian’s coverage of Poland, a kind of personal stress test—or perhaps a loyalty test—and the more I read, the more irritable I became. The paper’s voice felt a little too righteous, its attacks on what became known as illiberalism ever more shrill and pious.”—Our Man In Warszawa.
“How the idea of ‘Poland’ had been constructed since 1989 by the British middle class: plucky underdog, proud and on the right side, but only a few lucky ones can join our club.”
“’Civil society remained robust…’ Commentary: Meaning Polish friends were still quite nice, the ones that spoke English in coffee shops and on social media.”
“There is clear evidence that PiS used the foreign media much the same way Trump talked of ‘Fake News,’ to wave a fist at all those who didn’t understand the ‘deeper project.’ But the real impact of the international media was probably quite limited domestically within Poland, given that few Poles would have access to it.”

“A continuously decreasing number of critical channels come to play the role of communication ‘rubber rooms’ for the opponents of the regime, who can discuss their grievances and criticism among themselves but not toward a wider audience."
“The intense involvement of those chatting among each other on social media might elicit a false sense of masses displeased with the government, when in fact it is just the same people exchanging views in the same groups. Ghettoization is a method of neutralization.”—taken from the momentous endeavor of analyzing post-communist regimes.“
“In a post-modern fashion, the purpose of noisemaking is not to convince the people but to confuse them. While they keep up the narrative of populism as the general framework for interpretation, in specific issues the media of the adopted political family combines truthful and fake news alike.”
“Private media are bought up by the adopted political family whereas opposition media are crowded out, taken over or ghettoized. The role of their media is not only brainwashing but also money laundering.”

“In contrast to many Western countries where a cordon sanitaire has been developed by the media or political actors as a reaction to the rise of the extreme right-wing populism, this has not happened in Poland” – from a collection of essays on current Polish politics.
“Radio Maryja had previously been treated with significant reserve and criticized for pro-Russian sympathies and anti-Semitism. But in 2005, Jarosław Kaczyński claimed that he had been mistaken in warning against it.”
“The state takeover of ‘public’ broadcasting has entailed a wholesale purge of personnel. As for the news, there has been a pure ‘Breitbart-isation’.”
“Gazeta Wyborcza has come under steady attack from the government. All government offices and state-dominated firms are forbidden to advertise in the paper; private firms hoping for government contracts have been warned that their practices in this regard will be watched.”

“In 1925 Mussolini issued a circular, advising newspapers and magazines to reduce the coverage of crime, suicides, abuse of children, floods and other natural disasters, and anything else which might create unease and depress the public spirit.”—from the book on modern non-democracies.
“In the GDR and Yugoslavia, authorities used a system of postpublication censorship: if there was something wrong with an issue of a newspaper, for example, the issue would be confiscated and would have to be reprinted without the offending article.”
“Dismantling the free media ‘piece by piece,’ Orbán’s government established absolute control over all public media, dismissed journalists, introduced punitive fines for infractions of the new media law, revoked licenses, and denied radio frequencies to potentially maverick stations.”
“Trump told the assembled representatives of the press that, as president, he would rewrite the libel laws so that people can ‘sue you like you’d never been sued before.’”

“Journalists who had worked in the legal media during the communist period had to learn to tell the story directly rather than ‘hiding’ critical information and analyses ‘between the lines’ of complicated writing.”—from a book on current values in Poland.
“Within a year of the election, the Law and Justice government transformed the public media model for radio and television back into channels which, even more openly than in the last decades of communism, parrot the rulers’ lines.”
“In 2015, the parliamentary majority passed a new broadcast law giving the government greater control of the public broadcast media so that it would reflect ‘Polish patriotism’ and other government positions.”
“Assuming that only half of the regular listeners of Radio Maryja are susceptible to political mobilization—a rather conservative estimate—this would still comprise nearly 700,000 people ready to respond to radio director Fr Rydzyk’s call to action.”

“Alarmed by the scale of the trafficking, Western media and cinema have taken a proactive position to raise awareness and fight this modern slavery. Its perilous involvement is being critically addressed here.” – from a book on film and media representations of human trafficking in the Balkans.
“In this book, I describe, analyze, and categorize Western and East European feature films and media materials, as I point out certain narrative and cinematic flaws triggered by various economic, cultural, and production reasons. I investigate the accuracy with which they depict trafficking as well as their artistic qualities.”
“While production and text matter, audiences’ religious and gender identities (just to name these two) shape their responses to media products and influence the creation of meaning.”

“From her father, Marine Le Pen inherited the skill of delivering penetrating speeches and excelling as a media phenomenon”—on 18 populists from 12 European countries.
“After the Brexit vote, Farage prospered by treating public life as a game, by grabbing media attention with dramatic overblown statements, and debating vitally important issues with an utter disregard of the truth.”
“Geert Wilders was always bent on being different and, like most demagogues, was forever seeking the limelight.”
“The government ignored EU objections and appointed Jacek Kurski, who once described himself as Kaczyński’s bull terrier, as the new head of public television.”
“Foreign Minister Waszczykowski justified the elimination of independent media and affirmed that the government was  curing  the country’s illnesses caused by a new mixture of cultures and races, a world made up of cyclists and vegetarians, who only use renewable energy and who battle all signs of religion...”

“The emerging system of late modern politics in developed countries can be described with the term mediatized populist democracy.”
From a monograph on the “collective speculation on the popular,” the guiding force of today’s politics.
“Common language has grasped mass media as the fourth estate. The neopopular media interpreters—PR agents, bloggers, journalists, marketers, pollsters, consultants, scholars, everymen—make part of the fifth estate and will be one of the core concepts to grasp collective speculation in mediatized democracy.”
Zygmunt Bauman: “Csigó sets the commonsensical idea of the mediatization of contemporary politics in an entirely new perspective.”