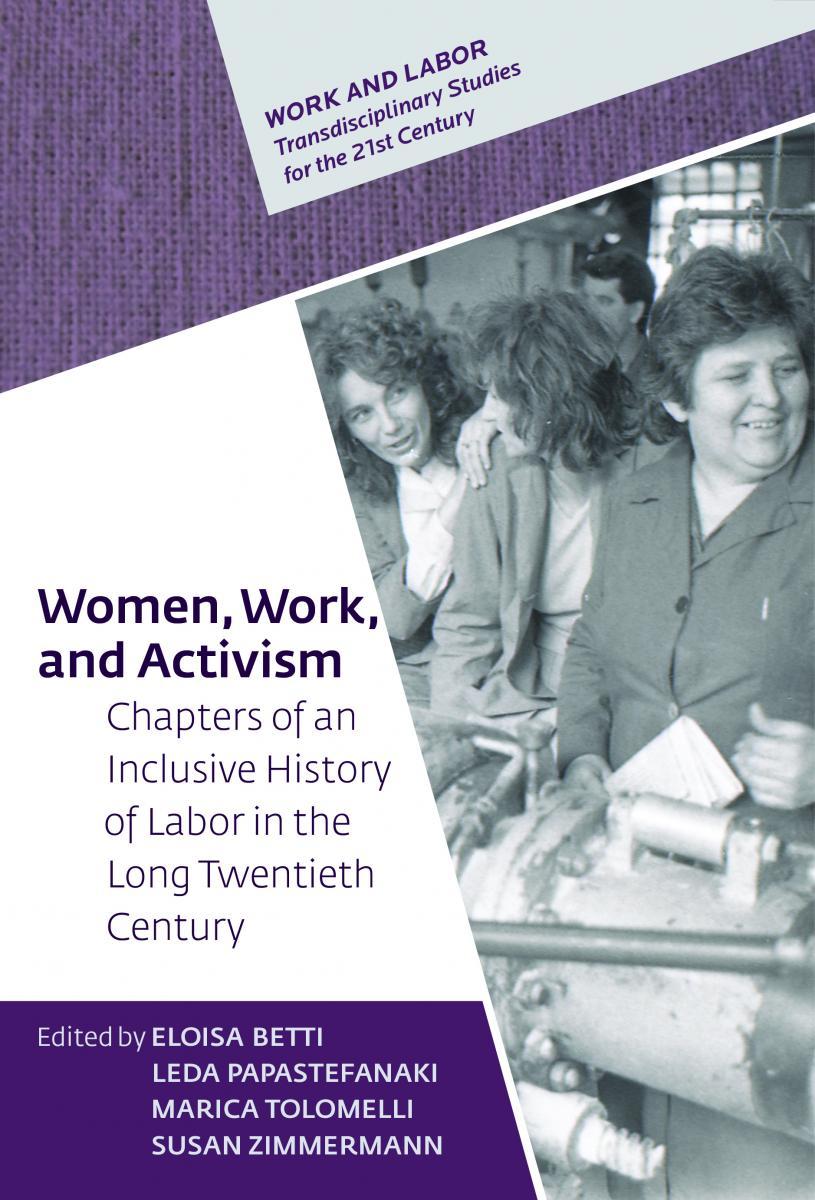 ISSUES OF LABOR ACROSS A VARIETY OF CEU PRESS PUBLICATIONS

This compilation features books of the Central European University Press, published since its establishment in 1993, that have some relevance to labor in a historical dimension. After the latest releases, titles in the backlist are arranged by content: contemporary topics are on top, older themes below. For more substantial information about the content and availability, please click on the covers of the book, or on the links inserted into the citations.

“Bringing together studies on women’s activisms—ranging from, mutual societies in the late 19th and early 20th centuries to the transnational circulation of ideas on vocational training in the 1950s and 1960s, and female migrants’ activism in the 21st centu­ry—this collection contributes to an inclusive understanding of the contours of women’s activism around work and labor.”—Women, Work, and Activism.
“We ask: how can women’s labor activism in a variety of men- and women-dominated contexts be ‘thought together,’ and how does this help bring about conceptual advancement in the history of women’s work-related activism?”
“The tremendous achievements during the 20th century in terms of women’s civic, political, social, and economic rights are not a definitive conquest. Recent developments represent a threatening scenario.”
“The world is undergoing a deep and unpredictable economic crisis and a new wave of loss of work opportunities unleashed by a viral pandemic. Today, women’s employment is at greater risk than men’s.”

In Czechoslovakia, “the draft law on state enterprise envisaged the formation in the enterprises of workers’ councils that would play an active role in management and even have the right to elect and dismiss directors.”—Making Sense of Dictatorship.
In Yugoslavia, “inaugurating workers’ self-management and enabling more decision-making abilities at company and municipality levels provided favorable conditions for the improvement of living and working conditions.”
“Socialized childcare was one of the pillars of East German policies to promote women’s equality through their participation in the waged labor force. 60% of East German under-threes attended a Kinderkrippe in 1989. By contrast, only 1.6% of West German children of the same age were placed in a crèche.”
“Historians have shown how workers re­functioned the forced community of a ‘socialist work brigade’ into decidedly ‘unpolitical’ leisure activities.”

“The phenomenon of labor precarity appears neither recent nor intrinsically grounded in the nature of the so-called ‘post-Fordist soci­ety’ of the past thirty years. It is in fact a long-term phenomenon that has char­acterized all the phases of industrial capitalism.”—Precarious Workers.
“The history of precarity relates to and, at the same time, distinguishes itself from the history of unemployment.”
“Job stability was considered an indispensable prerequisite for the development of the welfare society that characterized the three decades after 1945. The achievement of job stability emerged during the so-called ‘Fordist-Keynesian compromise’ and represented an exception unique to that period. This volume investigates the reasons related to the emergence of this excep­tion in Italy.”
“The policies of the Italian government vis-à-vis precarity during the Covid-19 pandemic have been largely in response to the growing protests in various industries and by the worst-hit workers, but they have been ambivalent.”

“During 1976 and 1977, a group of us began talking about organized labor’s predicament in relation to European capitalism, which had experienced new challenges imposed by the oil crisis of 1973 and its ensuing ramifications.”—The Passport as Home.
“With Christopher Allen, who was a professor at the University of Georgia when he died in 2011, we co-authored a number of pieces on German labor, including the chapter that became part of the two-volume Center for European Studies book on European labor.”
“I co-authored with Philip Gorski, now professor at Yale University the book The German Left: Red, Green and Beyond.  The German edition appeared with the title Grün schlägt Rot: Die deutsche Linke seit 1945.”
“Here is a Jew, born in Timișoara, who emigrated first to Vienna, then to the United States and who does not look back in anger, nostalgia, or longing for his lost roots.”

Members of the Work and Labor – Transdisciplinary Studies for the 21st Century series:

“Many on the European left were fascinated with the Yugoslav model of self-management, a potentially viable ‘third way’ between Western-style capitalisms and Soviet-style planned economies.”—Making and Breaking the Yugoslav Working Class.
“By introducing workers’ self-management, the Yugoslav communists hoped to put an end to mass mobilizations of peasants into the industry and allow for a smaller, but more settled, core of urban proletariat to appear.”
“Manual workers tended to contrast the privileges of functionaries in their surroundings to the idealized image of communists of the past or the virtues of the highest party leadership. The popular nature of the WWII Partisan movement, and the populist rule of Josip Broz Tito, gave credence to such views. Workers’ allegiance was not to the party, but to Tito and the general values of the revolution.”
“Instances of public riots during workers’ protests at the San Marco shipyard in Trieste seem significant for the strikes in Rijeka and Koper in 1966, in 1968, and in 1969.”

“In the Kladno Steelworks, when worker enthusiasm for socialist competitions was lacking, the children of steelworkers were called upon to ask their fathers why they had not yet been named the best worker.”—Labor in State-Socialist Europe.
“Stakhanovites in Soviet parlance represented ‘labor heroism’ in the socialist state, but ‘making workers’ could not be separated from managing those that were actually on hand. The factory walls were porous, and people’s life strategies crept in.”
“Between 1958 and 1969 there were more than 1,500 work stoppages, predominantly occurring in the most prosperous northern republics of Slovenia and Croatia.”
“The strike of 1977 in the Jiu Valley bears striking resemblance to the British strike of 1974 and the United States coal miners’ strike in 1977–78. All three were the result of rank and file discontent, and all managed to force both the state and coal companies to the negotiating table by threatening the energy supply.”

Further books on issues of labor from CEU Press backlist:

“In a simplistic approach, if trade unions are large and encompassing, the demand for a wage increase will remain moderate.”—Trimming the Sails.
“In countries such as Sweden, Norway, Denmark, Finland or Austria, social partners are highly concerned with other macroeconomic consequences of tax increase such as the rate of inflation or economic growth.”
“It is highly unlikely that Central and Eastern European countries can adopt an effectively working social pact: (i) strong state versus weak and often fragmented interest organizations; (ii) the almost perfect lack of sectoral level collective bargaining; (iii) the lack of interest of employers in a strengthened system of wage negotiations.”

“The intensity of labor unrest seems to depend on the presence of militant workers as well as on the existence of influential trade unions that played a role in toppling communism only to turn increasingly populist.”—Divide and Pacify.
“The working-class approach is of limited use in the postcommunist Central Europe.”
"Vanhuysse explores the reasons for the low level of labor strikes and reform protests in postcommunist Czech Republic, Hungary, and Poland. His time frame is 1989-96, and he utilizes quantitative data in a useful way in generating his conclusions. Summing up: Recommended." (Choice)

This collection of essays has increasing historic and archival significance about labor conditions in the early postcommunist transition period.—Women on the Polish Labor Market.
"Gender differences are shown to be pervasive and also to vary across other long extant and persisting dimensions of inequality such as territorial divisions of Poland, industries and branches of the economy, and city versus countryside.” (Slavic Review)

“The concept of empowering women through employment was rooted in pre-WWII feminist thought, but it could not come into being until the era of People’s Poland.”—Reassessing Communism.
“The ‘proletarian turn’ in 1948-1949 was an important element of the Party—including state women’s organizations—moving on to another stage of activity. The ‘new stage’ meant intensified preparations for the activation of women on the labor market, which was furthered through the development of professional training, popularization of the idea of competitiveness, and placing women in various professional positions.”
“The protest of workers from the Joseph Stalin Metal Works in Poznan in June 1956, was based mainly on economic and labor considerations, including the issue of reduced wages as a result of extremely high production quantity demands, the problem of unpaid overtime, unjustly calculated payroll tax, as well as generally poor working conditions inconsistent with health and safety standards.”

“A market system with ‘free’ wage labor (in contrast to slavery) always entails some missing futures markets for future labor power. Otherwise the worker would be bonded by contracts for life.”—Systems, Institutions, and Values in East and West.
“Under a market system with employment contracts, there can never be a complete set of markets for labor power. Although capitalism has meant a huge extension of property and markets, and it has made labor power a widespread commodity, it has also, by freeing labor from servitude, sustained missing markets for labor futures.”
“If the employer spends money on employee training and skill development, then this investment is lost when the worker leaves. As a result, without compensatory arrangements, employers might under-invest in human learning and education.”

“In 1870, Great Britain had the shortest work week in Western Europe. By World War I, the average work schedule in Western Europe had already dropped below sixty hours per week.”—Austerities and Aspirations.
“At the beginning of the 20th century, employers rarely offered paid vacations, and there were barely any paid holidays.”
“The half-day Saturday appeared after World War I and began to spread in the 1930s; then, decades later, starting in the 1960s, the five-day work week was realized in most Western European countries.”
“Corporatist arrangements functioned most effectively in Austria, the Benelux countries, Switzerland, West Germany, and the Scandinavian countries. The governments of France and Italy intervened directly in wage negotiations, while in the United Kingdom and Ireland, collective bargaining was fully decentralized. Cooperation between employers and labor would not have been possible without the commitment of governments to social welfare.”

"In the Kingdom of Hungary, with its population of 18 million and spanning a territory far larger than present day Hungary, 33 percent of the labor force outside primary production, but less than six percent of the overall population enjoyed state health insurance.”—Divide, Provide and Rule.
„Developments towards a more socially integrative poverty policy, like reforms aimed at social inclusion and a more far-reaching state social policy, bore only limited fruit.”
“This book offers a decidedly critical view of the elites of that period, who succeeded in avoiding responsibility for a significant part of the social costs of industrialization.” (Slavic Review)