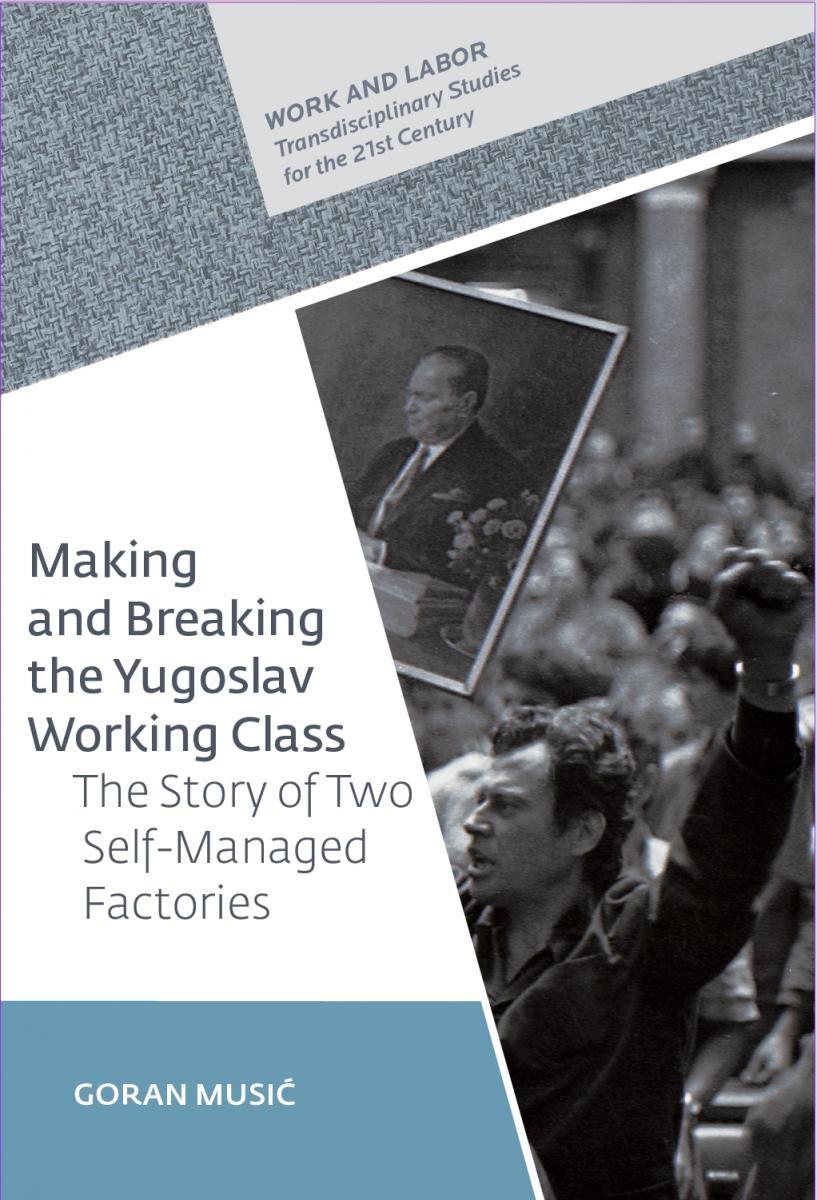 KOSOVAR THEMES ACROSS A VARIETY OF CEU PRESS PUBLICATIONS

This compilation features books of the Central European University Press, published since its establishment in 1993, that have some relevance to Kosovo, its history and culture. After the latest release, titles in the backlist are arranged by content: contemporary topics are on top, older themes below. For more substantial information about the content and availability, please click on the covers of the book, or on the links inserted into the citations.

“A joint team of Albanian and Serbian communist functionaries, led by Sinan Hasani and Ivan Stambolić visited the Industrija motora Rakovica (IMR).  The workers showed great interest in the event and joined the discussions. For them, it was an opportunity to push for popular demands, summed up by the factory press as ‘the protection of the Serbian minority in the province.’ The Kosovo migrant workers of Serb origin contributed to the disquieting tone of the proceedings with firsthand accounts of the difficulties their families were facing back home.”—from Making and Breaking the Yugoslav Working Class
“Rakovica’s delegate in the Serbian Parliament, IMR worker Milorad Despotović claimed that the Kosovo aid funds were not used for productive investments but ended up in the villas of Albanian politicians.”
“The antidote to Albanian nationalism was not seen in the greater unity of the Serbian nation, but in insistence on the classic Titoist formula of more integral Yugoslavism and the strengthening of class consciousness.”

“Instead of being universally accepted as a true public service forum, Radio-Television of Kosovo (RTK) lingers between the models of the state broadcaster and a weak replica of a public service media, sometimes seen as a mouthpiece of the govern­ment, sometimes of particular political parties and most times unable to serve a genuine public service role.”—from Up in the Air?
“The public service broadcaster is faced with the weak professional performance of journalists, growing debts, a lack of transparency and accountability, and clientelism in the procurement of programming produced outside the broadcaster, also including, according to allegations, nepotism, and corruption.”
“In the region, the ‘smallest’ public service media firm in this respect was recognized in Kosovo (1 employee for 2659 citizens).”

A volume with Kosovo in focus:

“In Kosovo today, the most influential actors in the political arena are: the leaders of the political parties, other top party members, top officials of the international organizations residing in Kosovo, top Kosovar bureaucrats, and the US Ambassador to Kosovo. However, it is generally accepted that the leaders of organized crime networks and strong clans have some influence over Kosovar politics as well”.—from Civic and Uncivic Values in Kosovo
Seventeen essays discuss the historical roots of the conflict, explore various facets of Kosovo today, and examine the development of democratic practices and liberal values in Europe's newest state.

Books with relevance to Kosovo on CEU Press back list, going backwards in time:

The failed success of a historical trial owing to the death of Milošević is discussed in the volume on the public use of history, politics of memory, and transitional justice in post-communist societies.
“Agron Berisha testified that the police came to kill Albanian civilians, men, women and children, even pregnant women. The reason, the sole reason, was because they were Albanians. Milošević retorted: You’re an Albanian too. Berisha: Yes. Milošević: They didn’t kill you.”

“The Temporary Media Commissioner took an active role primarily in monitoring the print media to prevent hate speech and limit the vitriolic political discourse in the postconflict Kosovo media.”
Assessing the international media assistance in the Balkans.
“Following the March 2004 riots in Kosovo, when the professionalism of the people running Radio Television of Kosovo was seriously questioned, international direct monitors were imposed on RTK by the OSCE.”
“Kosovo’s new leadership was always going to obstruct the survival of a strong, competent, confident, independent public service broadcasting. And journalists and citizens were never going to rally in significant numbers to defend it against the political takeover that began around 2007.”
“Alarmingly, the 2015 IREX Media Sustainability Index sees the biggest decline of the conditions for media sustainability in Kosovo since it started measuring it, pointing to worsening conditions for media and journalists in Kosovo.”

“The Orthodox Archimandrite of Kosovo publicly accused Albanians of raping women, including young girls and the elderly.”—from A Century of Populist Demagogues
“Ivan Stambolić sent his friend and confidant, then Serbian communist party leader Slobodan Milošević, to Kosovo with a mission to ‘calm things down.’ At that time the two friends both subscribed to the Titoist, anti-nationalist political platform promoting friendship and coexistence among the country’s nationalities. Milošević on several occasions denounced Serb nationalism.”
“Sloba-Sloboda emerged from a cloud of dust, climbed the 18-metre podium and gave a speech. He was surrounded by Orthodox bishops and created the impression that he presided at his own coronation, replacing communism with nationalism.”

The book on education policies in former Yugoslavia and some of its successor states tells the whole winding story from the first student unrests in 1968 up to our days, when besides the leading higher education institution of Kosova there exists also a “University of Priština temporarily located in Kosovska Mitrovica.”

“Mitrović’s first feature film, Ešalon doktora M. (1955), was the first Yugoslav movie modeled after, and made under the direct influence of, the American Western. The story of this movie is set in Kosovo.”
A monograph on the Americanization of Yugoslav culture in the sixties.
“The poetics of the Western genre were developed even more in Kapetan Leši, in which Captain Ramiz Leši has the assignment of liquidating the remaining Ballist forces in Kosovo. The sun, dust, and sweat dominate Kapetan Leši, which makes the slopes of the Prokletije Mountains, the valley of the Drim River, and the town of Ðavolja Varoš, where it was filmed, greatly resemble the setting of American Westerns.

Between 1948–1968, “Yugoslav authorities attempted to create a separate identity for the Albanian speakers of Kosovo by using šiptarski for the Albanian of Kosovo and its Geg-based standard and albanski for the language and standard of Albania. The brief move for a separate Kosovar—as distinct from Albanian—identity, which surfaced among some Kosovars between the 1999 NATO war and independence in 2008, is more or less a thing of the past.”
By exploring the development of ethnic diversity and national tensions, this book challenges the readers to engage in a new way of thinking about Balkan studies.
“Although a few Geg features were established in the standard during the communist period, the ‘unified language’ (gjuha e njesuar) is overwhelmingly Tosk. While some Geg-speaking intellectuals advocate pluricentrism or bidialectalism in the standard, and some Tosk-speaking intellectuals vigorously reject the notion of any fundamental changes, a kind of middle ground is represented by Geg intellectuals who want to ‘open up the standard’ to Gegisms.”
“According to the traditions of many Muslim families in rural Bosnia and Kosovo, a raped female member dishonors and shames her husband, father, and brother(s). A story of a Kosovar Albanian girl reports that after witnessing her repeated rape, her father sent her to join the Kosovo Liberation Army, where she would seek revenge against her abusers, and her likely death would redeem his honor.”

“Ottoman rule in Kosovo and Metohija, Macedonia, and the Sandžak left permanent traces of backwardness on social relations, lifestyle and work habits, the economy, commerce, and health care.”—from Battling over the Balkans
“Insurgents in Montenegro in 1919, peasant resistance in Croatia in 1920 and kaçak banditry in Kosovo all reflected opposition to the central authority of the Kingdom of Serbs, Croats, and Slovenes.”
“The direct leaders of the rebellion were Drenica kaçaks. Active since Ottoman times, these armed rebels were brigands, avengers, revolutionaries, and assassins all in one, and they fought against all institutions of the modern state with great zeal and determination. The kaçak leader Azem Bajta was successful in avoiding ambushes and escaping chases.”
“The duke Kosta Pećanac mobilized his 'committee detachment,' which made the advancement of the Allied forces into Metohia significantly easier. He is distinguished for the seizure of Peć and Dečani.”

“Kosovo was only significant for Tirana in the aftermath of the First World War, during and after the Second World War and after the collapse of Albanian Communism. The years between these episodes were marked by disinterest in the fate of Kosovo.” These four critical junctures in Albania’s relationship with Kosovo are observed with the help of documents in the collective volume on ideologies and national identities.

“My entry into Prizren in Mirdita dress caused great attention in the streets. At the hükümet, too”.
During his travels from 1905 onwards, the eccentric paleontologist from Transylvania, Baron Nopcsa sent articles to leading European political newspapers, and got involved in the local power tussles. His memoirs give captivating insight to the fermenting years leading to Albanian independence.
“The Conference of the Ambassadors in London resolved that Gusinje, Peja, Gjakova, Prizren and Dibra would be given to Serbia and Montenegro. Therefore I suspended all further activity relating to Albania."

“The attempt has often been made to insinuate into public opinion the belief that between the Guegues and the Tosques there existed ab antiquo a certain discord, even a traditional enmity. Nothing is more incorrect”. (Vasa)
Texts that paved the road to national identities are presented in five volumes: the specimens of primary sources are accompanied by introductory essays and contextual analyses. The collection includes, among others, the program of the League of Prizren from 1878, and The Truth on Albania and Albanians by Pashko Vasa from 1879.