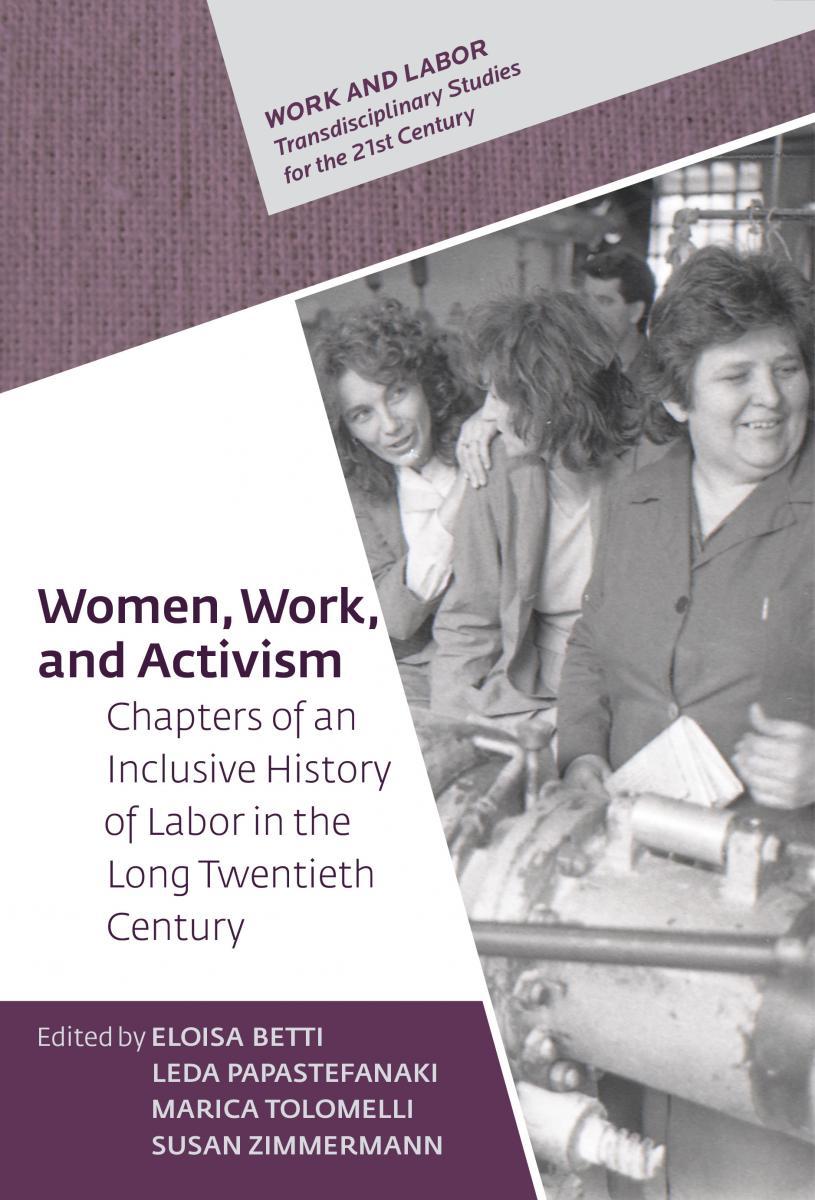 ITALIAN THEMES ACROSS A VARIETY OF CEU PRESS PUBLICATIONS

This compilation features books of the Central European University Press, published since its establishment in 1993, that have some relevance to Italy, its history and culture. After the latest release, titles in the backlist are arranged by content: contemporary topics are on top, older themes below. For more substantial information about the content and availability, please click on the covers of the book, or on the links inserted into the citations.

“The waterfront strike of 1955 initiated by the exclusively male ship repair workers lasted as long as it did thanks to the support provided by women’s associations. The Comitato Familiari Portuali and the Unione Donne Italiane (UDI) were directly involved in organizing support.”—Women, Work, and Activism.
“In fact, the strike by the Genoese ship repair workers received the official support of only the Italian General Confederation of Labor (CGIL). The CISL, the UIL, and the Christian Associations of Italian Workers (ACLI) all opposed the workers’ shutdown and boycotted their actions.”
“Unlike their British counter­parts, Italian working women did not experience the types of hostility, which led in Britain to the growth of women-only union confederations.”
“At the turn of the 20th century, women composed close to half the Italian migrant workforce in New York. The majority were working for the New York garment industry, which in 1909, produced 69 percent of all women’s clothing across the United States.”

“The growing fame and prestige of Tuscan (Italian) meant that since the turn of the sixteenth century Neapolitan and Sicilian literati chose to write in this northern language or stuck to Latin.”—Words in Space and Time.
“Venice’s maritime empire in the Adriatic and eastern Mediterranean made Venetian into the main lingua franca in these areas, however, the Republic’s elite preferred to read and write in Tuscan.”
“The University of Bologna (established in 1088) and the University of Rome (founded in 1303) continued with Latin as the main medium of education until the death of Pope Leo XII in 1829.”
“The first linguistic atlas of Europe was published in Italian at Milan (Atlante Linguistico d’Europa, Biondelli 1841).”
“The rise of the ethnolinguistically defined nation-states of Italy (1861) and Germany (1871) as main European powers posed ethnolinguistic nationalism as a new desired norm of statehood creation, legitimization, and maintenance across Central Europe.”

A book with an Italian focus:

“In mid-August 1941, the Pasubio Division was the first to take action in the war alongside the Germans, annihilating the Soviet forces remaining between the Dnieper and Bug rivers.”—Stalin's Italian Prisoners of War.
“The variety of motor vehicles, made up of seven different brands (Fiat, Alfa, Lancia, Isotta Fraschini, Bianchi, Om, and Spa), complicated the distribution of spare parts, often stored in warehouses some 400 kilo­meters from the battle lines.”
“Togliatti and Stalin discussed about setting up an Italian contingent, which would be made up of communists and antifascists recruited among the prisoners of war.”
“More than a few Italians who in the course of their retreat or during the davai marches found shelter in the izbas scattered along the way were amazed to find that, in the country of communism and atheism, such dwellings had small altars and icons lit up with candles.”

Bush: The outpouring of friendship for you in Italy was wonderful. It came through on our television.
Gorbachev: In Italy, I saw a lot of products and few customers. In our country, it is the opposite. We are moving toward private property. Our eventual goal is to make all these enterprises act within the market. In Italy, Soviet businesses operate in just this way. (December, 1989) Sentences taken from the last face-to-face conversations of Cold War leaders.
Bush: But you and I must take care to consult with our smaller NATO partners. Kohl: Yes. Bush: Genscher made this statement to the Italians in Ottawa: ‘You’re not in the game.’ This offended Italy, and some of the other guys. Genscher must be sensitive. Kohl: I totally agree. I wasn’t in Ottawa, but I had to take some of the consequences of Genscher’s act. And I didn’t like it. It was totally unnecessary. It’s not my style either. I have to do a master resuscitation with Andreotti and the others. (February, 1990)

“In Italy’s northeasternmost region, Friuli Venezia Giulia, hardly anyone denied the long-term negative consequences of their peripheral geopolitical context for the socioeconomic development of the region after its 1918 annexation by Italy.”—from a book on labor history during the Cold War era.
“Italian and Yugoslav partisans had commonly fought against Nazi occupation. After the end of the war, many workers in cities like Trieste and Monfalcone looked upon Titoist communism with interest and benevolence.”
“Three instances of public riots during workers’ protests at the San Marco shipyard in Trieste seem significant for the strikes in Rijeka and Koper: these occurred in 1966, in 1968, and in 1969.”
“Many on the Western European left were fascinated with the Yugoslav model of self-management, a potentially viable ‘third way’ between Western-style capitalisms and Soviet-style planned economies.”

“The new thinking on the road to socialism in Italy found its first expression in the development of updated, more sophisticated if not yet heterodox, analyses of Italian capitalism. A crucial impulse in this respect came from the communist-dominated trade union the CGIL (Confederazione generale italiano del lavoro).”—the origins of Eurocommunism.
“Neo-Keynesian economic planning and structural reforms were at the centre of attention at the 10th Party Congress in 1962 and at the conference on ‘Tendencies of Italian Capitalism’ organized in the same year by the Istituto Gramsci.”
“The Unified Socialist Party (PSU) turned Czechoslovakia into an election theme to discredit the PCI. The PSU was extremely sympathetic to the Czechoslovak events; specifically, it identified with the most critical revival tendencies in the Prague Spring.”
“An American veto remained one of the main obstacles for PCI government participation.”

“Italy had been unprepared for war, militarily or economically. The Fascists were never able to organise an efficient food supply and distribution system. Right from the beginning of the war, the population had to cope with major shortages, and this in turn led to a widespread black market.”—Ireland' Helping Hand to Europe.
“Although largely forgotten or unknown, Italy had also been very heavily bombed by the Allies. Rome alone suffered more from bombing than all the British cities combined during the Luftwaffe’s raids. The number of deaths for the entire country is estimated to be at around 60,000.”
“Stalin was against the Marshall Plan, but the Partito Comunista Italiano tended to be in support of it as it sought to avoid confrontation on this issue with public opinion.”
“A worried Walshe, ambassador to the Holy See, wrote that if the communists won in Italy, Western Europe would follow. He then had an audience with Pius XII and offered him to come to Dublin if things turned very bad.”

“Victorious in the war, the Italian nation declined into chaotic postwar revolutionary turmoil: the biennio rosso. The country became bastion of leading demagogues who preached hatred against the organized working class and the socialists. The revolutionary chaos was followed by the preemptive fascist counter-revolution of Benito Mussolini.” This volume discusses eighteen populists from twelve European countries over the past hundred years.
“Italy possessed an unusually large number of self-employed citizens—small business owners who continually aspired to avoid taxation. They admired Berlusconi and tried to emulate his successes in this domain, and wholeheartedly believed in the promise of his leadership.”
“He explained: ‘Perhaps one of us has stolen the fiancée of the presiding judge. Such things happen to us, because we’re well known to be tombeurs des femmes.’ The 5-foot, 5-inch-tall Berlusconi loved to speak about sex, and his audience loved to hear about it too.”

“In the imperial departments of Italy, conscription was regarded not only as a means to tame the ‘wild’ communities of the mountain peripheries, but, literally, to reinvigorate the decadent, priest-ridden youth of the urban upper classes.”—turning nation states from empires.
“The French prefect of Parma saw the opera as an active agent of moral depravity that had to be eradicated: The theatres in Italy today are horrible, and serve only to propagate indecency, corrupt morality, encourage bad taste, and harbor notions of violent thoughts and crude passions.”
“The acquisition of Venice was a fairly ignominious process; only when the Austrians withdrew the vast bulk of their men to defend Vienna did the Italians make any significant headway—more-or-less unopposed—into Venetian territory.”
“Clemenceau grew determined to foster a Yugoslav state as a counterbalance to Italy, with a view to reducing Italian potential to challenge France’s position within the Mediterranean and in North Africa.”

“In 12th-century Byzantium, the Italians began to force the local professionals out of industry and trade.”—The Rise of Comparative History.
“Yugoslavs who flocked to the towns were spared from the tormented and miserable fate of the Balkanic peoples and could participate in the civilized life of Western Europeans. They assimilated to the Italians: adopted a Venetian dialect, and even allied with the Italian Party.”
“A second period followed, still romantic but already belonging to the masses. The faith in nationality as the basis of all collective organization becomes universal or nearly universal in all echelons of the society. This is the era of Mazzini.”
“The years between 1859 and 1870 saw the development of a general tendency to form great nation-states based on the principle of a ‘Piedmont’; the word ‘Piedmont’ was used henceforth as a common noun—by the union around the nucleus of the territories inhabited by a population of common origin, common language, and common aspirations.”

Further titles with relevance to Italian history and culture, going backwards in time: