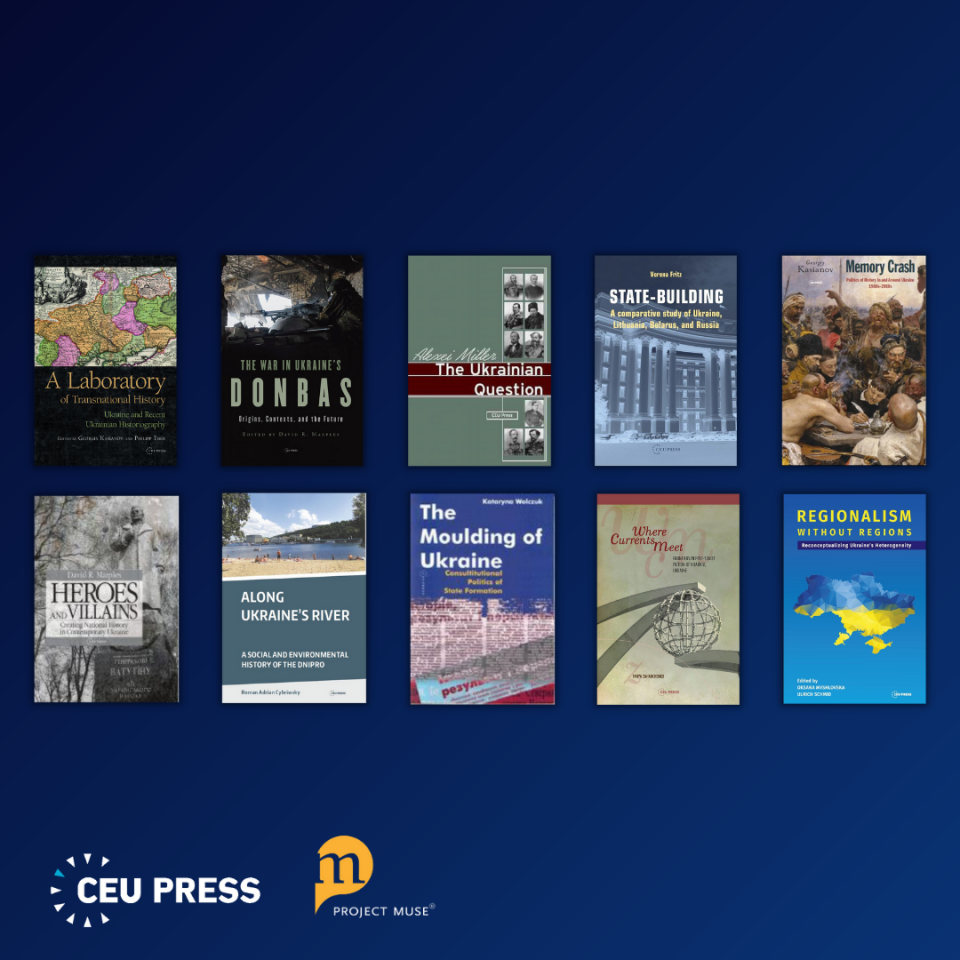 What was the Russian Empire’s response to the Ukrainian question throughout the nineteenth and early twentieth centuries?

In the long list of CEU Press titles dedicated to the history and culture of Ukraine, from the ancient past to the present, the historical monograph, The Ukrainian Question by Alexei Miller is strikingly relevant to the horrendous and tragic events in Ukraine today.

In line with other national awakenings, the Ukrainian nation-building started in the mid-nineteenth century. Many “Great Russians” like Herzen and Chernyshevskii acknowledged a separate Ukrainian identity, but the government reacted with restrictive measures. Publishing in Ukrainian was suspended, including textbooks and religious texts, and no schooling was provided in the language until 1905.

Alexei Miller demonstrates that the idea of “Little Russia (Ukraine) and White Russia (Belarus) as ‘age-old Russian lands,’ and of the Little Russians and White Russians as parts of the Russian people, came through clearly in the government documents of the day.” Linguistic assimilation of the Little Russianshad advanced rapidly and changed the Great Russian:Little Russian ratio, estimated to have been 2.5:1 at the time. Yet, the All-Russian nation project, the alternative to the Ukrainian nation-building project, had failed. The author explains this fact through the analysis of historical, political, economic, and cultural factors.

“The Ukrainian question” has been the focus of several more outstanding publications of the CEU Press:

Following the curves and flows of the Dnipro River, Along Ukraine’s River by Roman Adrian Cybriwsky provides a cultural geographic tour, beginning with a praise for the exquisite beauty of Scythian gold and the achievements of Kyivan Rus. The author describes the Mongol destruction of Kyiv, the Cossack dominion, the colonization of Ukraine, the epic battles for the river’s bridges in the Second World War, the building of dams and huge reservoirs by the Soviet Union, and the crisis of Chornobyl (Chernobyl).

A Laboratory of Transnational History, edited by Georgiy Kasianov and Philipp Ther, provides a multidimensional history of the cultures, religious denominations, languages, ethical norms, and historical experiences that lead to today's Ukraine. The editors of this collection demonstrate that “Ukraine's history lends itself particularly well to the transnational approach since it was not a strong nation in the nineteenth and twentieth centuries. The accidental outcome of this book is the provision of an alternative reader of Ukrainian history, a welcome development for a new nation with a troubled and complex past."—Slavic Review.

In Heroes and Villains, David Marples engages with the heated debate concerning the role of the armed groups fighting on the Ukrainian fronts during the Second World War. Who were the heroes, and who were the villains? “Nation-building in Ukraine is far from complete, and it seems unlikely that the population from the southern and eastern regions of the country will ever fully internalise the Ukrainian national idea, as it is ingrained in Western Ukraine. An interesting case study of what happens to the discipline of history when it is suddenly set the formidable task of rewriting history and becomes inseparable from political intrigue.”—Europe-Asia Studies.

The Moulding of Ukraine by Katarzyna Wolczuk discusses the politics of formation of the new-born state in the 1990s and offers "two highly convincing points on the national question and on state building. First, the national question was the most important obstacle in adopting the constitution. Second, the process of adopting the constitution was very different from the process in established postcommunist and western states. Constitutionalism was a central element of state building in post-Soviet Ukraine.”—Slavic Review.

The state-building process in Ukraine is compared to that in Lithuania, Belarus, and Russia in another study, State-Building by Verena Fritz. "The timely creation of solid political institutions without the interference of mafia and oligarchic groups leads to better and more effective state-building policies is compelling and persuasive."—Comparative Political Studies.

An international team of scholars address the complexities of Ukraine’s historical development through the detailed Regionalism without Regions, edited by Oksana Myshlovska and Ulrich Schmid. “The main findings of the research project (probably one of the last ones that include Crimea and Donbas) sheds light on Ukrainian society on the eve of the Euromaidan and thus helps to relativize the deterministic discourse of Ukraine as a regionally-divided country deemed to be disintegrating.”—Slavic Review.

The vibrant bilingual literature of Kharkiv, a historical home of modern Ukrainian culture, has been persistently overlooked as a subject of study, often in Ukraine itself. 'Shimmering' Kharkiv is moved from the margins to its rightful place at the center of our attention in Where Currents Meet by Tanya Zaharchenko that explores the ways in which younger writers in this border city in east Ukraine come to grips with a traumatized post-Soviet cultural landscape.

Few countries match the weight with which historical legacy impacts on here and now. “Cultural and historical diversity, which could have been advantageous for the country, became toxic because of the irresponsible uses and abuses of the past. Ukraine demonstrates how an overabundance of the past blocks future advancement. Moreover, the country’s preoccupation with memory complicates its perception of the world, and conflicts about the past become conflicts in the present.”—from the preface of Memory Crash by Georgiy Kasianov, available in open access.

By going beyond simplistic media interpretations, The War in Ukraine’s Donbas, edited by David Marples, not only identifies the roots of this conflict, but also discusses the impact of Euromaidan and consequent domestic and international developments on the war.  While every chapter discusses a different issue, together they provide a coherent picture of Ukraine and Eastern Europe in the period 2013–2020. The volume gives a voice to different social groups, scholarly communities, and agencies relevant to Ukraine’s recent history.

In addition to these publications, Ukrainian themes abound across a variety of CEU Press titles — see here to browse their listing.