Zsuzsa Hetényi is Professor at the Institute for Slavic Studies, ELTE University, Budapest, and translator (Hungarian Academy of Sciences, Award for translation, 2002). With 180 articles in six languages to her credit, she has also authored a monograph study on Biblical and messianic motifs in Babel's Red Cavalry (1991) and edited and co-authored the History of the Russian Literature (I-II., 1997-2002). Her main field of interest is 20th century Russian Prose. Hetényi has lectured and given conference papers in Austria, Croatia, France, Germany, Great Britain, Italy, Israel, Lithuania, Russia, Slovenia, Spain, Sweden, Switzerland and the USA. Her Örvényben: Az orosz-zsidó próza története [In a Maelstrom. The history of the Russian-Jewish literature], which included a one volume anthology in her own translation, was published in 2000. Her present monograph is an extended and revised English translation of this book. 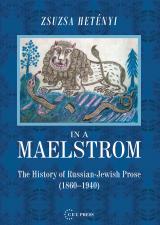