Sándor Márai (1900-1989) published 46 books, mostly novels, before leaving Hungary for political reasons in September 1948. He was considered to be Hungary’s most influential representative of middle-class literature between the wars. After leaving Hungary and settling in the United States,
he continued to write prolifically. He died in 1989, apparently taking his own life, and in the same year was awarded the Kossuth Prize, Hungary’s highest award for literature. 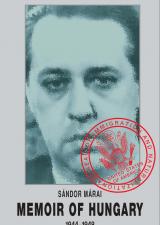