Natalie Zemon Davis is the Henry Charles Lea Professor of History emeritus at Princeton University, where she also served as Director of the Shelby Cullom Davis Center for Historical Studies, and is also Adjunct Professor of History at the University of Toronto. She has taught earlier at the University of Toronto and at the University of California at Berkeley. A social and cultural historian of early modern times, she is the author of 200 articles and of nine books, with many of them translated into several foreign languages: Society and Culture in Early Modern France; The Return of Martin Guerre (she also served as historical consultant for the French film Le Retour de Martin Guerre); Fiction in the Archives: Pardon Tales and their Tellers in Sixteenth-Century France; Women on the Margins: Three Seventeenth-Century Lives; The Gift in Sixteenth-Century France; Slaves on Screen: Film and Historical Vision; A Passion for History; Trickster Travels: A Sixteenth-Century Muslim Between Worlds; and Leo Africanus Discovers Comedy: Theatre and Poetry across the Mediterranean. She served as historical consultant for Wajdi Mouawad’s play Tous des Oiseaux, which was itself inspired by her book on Leo Africanus. A former president of the American Historical Association, she is the recipient of several international prizes, including the 2010 Ludwig Holberg International Prize in the Humanities; the 2012 National Humanities Medal in the United States; and the 2014 Gold Medal in History from the American Academy of Arts and Letters. She has been awarded honorary degrees from various universities, including Harvard University, Yale University, Oxford and Cambridge, the Université de Paris-Sorbonne, and in Canada, the University of Toronto and Memorial University of Newfoundland. In 2012, she was made a Companion of the Order of Canada. 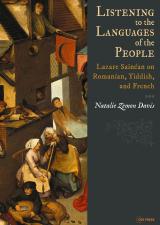