Joseph Malherek holds a Ph.D. in American Studies from George Washington University in Washington, D.C. He was recently the Junior Botstiber Fellow at the Institute for Advanced Study at Central European University, and he has been a Fulbright Visiting Professor of Austrian-American Studies at the University of Vienna. He has received fellowship awards from the Studienstiftung des deutschen Volkes, the U.S. National Endowment for the Humanities, and the American Historical Association. His writing on transatlantic migration, twentieth-century intellectual history, and the history of capitalism and consumer culture has been published in many venues, including the Bulletin of the German Historical Institute, the Journal of Austrian-American History, and the Leo Baeck Institute Year Book. 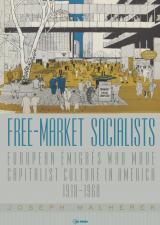