Ivan Cankar (1876–1918) was a Slovenian writer, playwright, essayist, poet and political activist. He is regarded as the greatest writer in the Slovene language and the founder of modernism in Slovenia. He had a major effect on the Slovene language as such, established a model of lyrical prose that overshadowed his contemporaries and predecessors. 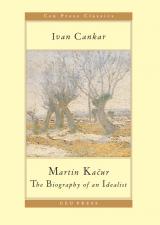