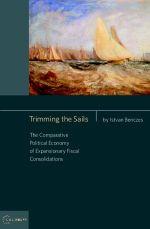 The book provides a clear, multidisciplinary and systematic analysis of the relatively new concept of the so-called expansionary fiscal consolidations. This concept suggests that fiscal adjustment should not be in trade-off with economic growth if certain conditions are met. But why do only a few countries and only at certain times experience the expansionary effects, while others not at all? The necessary institutional conditions and circumstances have been totally neglected in the literature, or analyzed only partially at best.

Having evolved a theoretical framework, it is tested on a difficult case: Hungary, which has had the highest deficit in the European Union. The main question was whether Hungary has a chance to experience short term growth effects in times of adjustment.

List of Figures
List of Tables
Acknowledgements
1. Introduction
1.1 The puzzle: expansionary fiscal consolidations
1.2 Scope of the book
1.3 Why a comparative political economy approach?
1.4 Sources and data
1.5 Structure of the book

PART ONE: A critical Assessment of the Concept of Non-Keynesian Effects

3. An Expectational View of Fiscal Policy: A Non-Linear Approach to Fiscal Consolidation
3.1 The traditional Keynesian view
3.2 The concept of a negative fiscal multiplier
3.2.1 Three explanations of non-Keynesian effects
3.2.1.1 Blanchard and his deterministic model
3.2.1.2 Sutherland’s stochastic model
3.2.1.3 A neoclassical formulation of non-Keynesian effects in the model of Bertola and Drazen
3.2.2 Testing for non-linearity in demand
3.2.3 Descriptive analysis of the EU-14
3.3 Intertemporal decisions—the modern theory of consumption
3.4 Non-Keynesian effects and the criticism of Hall’s stochastic model—the importance of liquidity constraints
3.4.1 Measuring liquidity constraint in developed economies
3.5 Summary

8. The Labor Market and Wage Bargaining in Hungary—the (Ir)relevance of a Social Pact
8.1 The evolution of industrial relations in Hungary: a historical overview
8.2 Labor market implications of the enlargement: the three levels of social (non)dialogue
8.2.1 The pivotal role of the state
8.2.2 Sectoral-level collective bargaining: the weakest chain
8.2.3 At the lower end of the spectrum: company-level negotiations
8.3 About the irrelevance of a Hungarian social pact
8.4 Summary 214

"According to conventional wisdom, fiscal contractions come with economic and political costs. Reduction in deficit is widely believed to have a negative short-term effect on economic growth and employment and, for that reason, to be politically unpopular. István Benczes's study is the first book-length treatment of the issue. It combines a critical survey of the literature with a quantitative analysis of fiscal adjustment in the pre-enlargement EU and an in-depth case study of Hungary, the EU country with the highest fiscal deficit in 2006."

"István Benczes, besides giving a very comprehensive and critical review of the literature, has done an excellent job in pushing the limits of research toward new territories. A most welcome novelty of his work is the investigation of the role of the financial system in the examination of non-Keynesian effects."

"A concise, well-structured scholarly work that offers rich, albeit careful analysis with balanced views on the diverse literature. The monograph pays special attention to critically assessing the underlying theories and marshals solid evidence on the growing relevance of non-Keynesian effects in markets both East and West. The work sheds new light, long sought after, on why there has been only slight progress made and on why repeated failures characterized the Hungarian fiscal sece."

"This book is an exciting contribution to the comparative political economy of expansive fiscal consolidations and their preconditions. Eminently suited for classroom use and as a reference volume."