With Their Backs to the Mountains

A History of Carpathian Rus’ and Carpatho-Rusyns 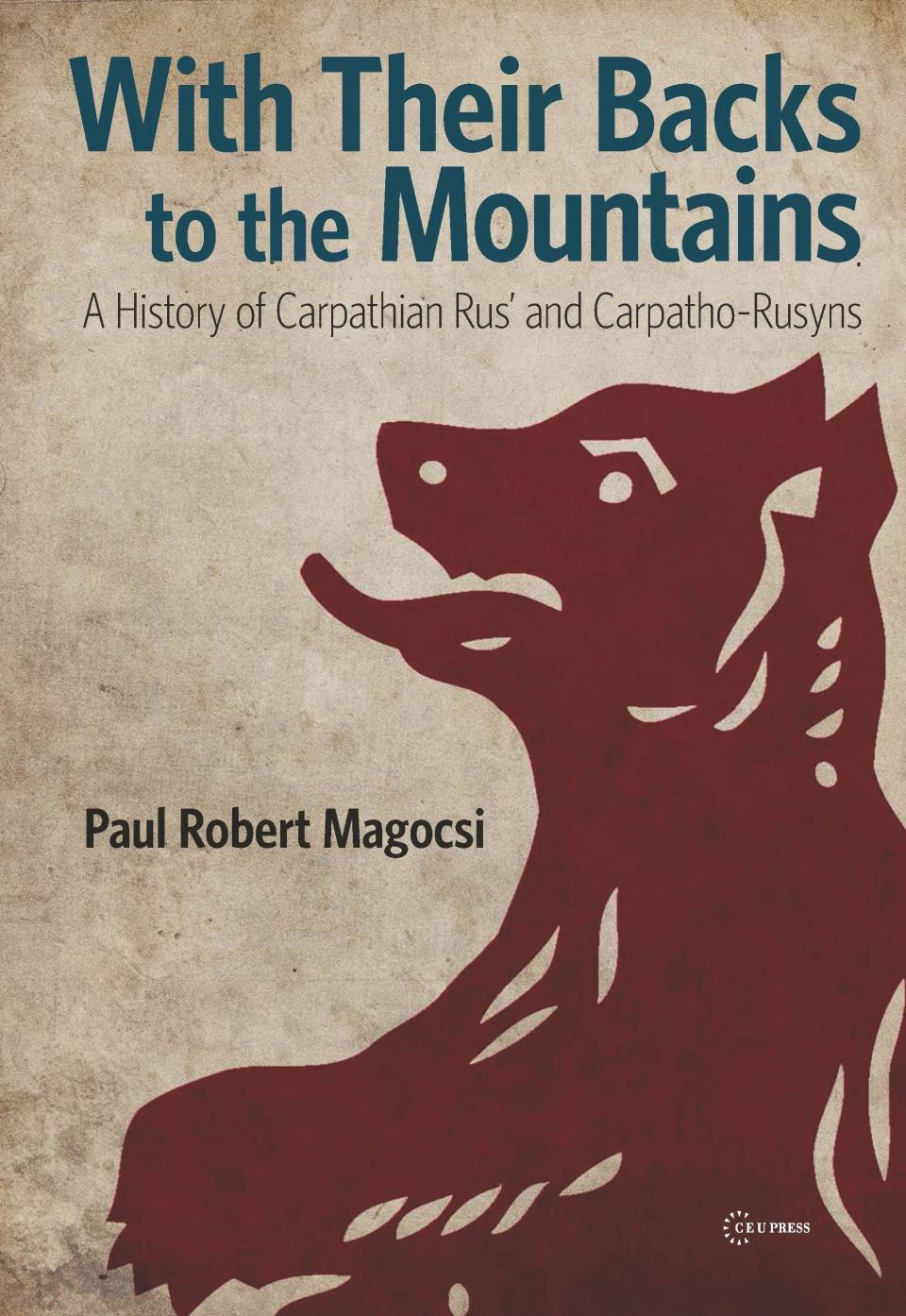 This is a history of a stateless people, the Carpatho-Rusyns, and their historic homeland, Carpathian Rus’, located in the heart of central Europe. A little over 100,000 Carpatho-Rusyns are registered in official censuses but their population is estimated at around 1,000,000, the greater part in Ukraine and Slovakia. The majority of the diaspora—nearly 600,000—lives in the US.

At the present, when it is fashionable to speak of nationalities as “imagined communities” created by intellectuals or elites who may live in the historic homeland, Carpatho-Rusyns provide an ideal example of a people made—or some would say still being made—before our very eyes. The book traces the evolution of Carpathian Rus’ from earliest prehistoric times to the present, and the complex manner in which a distinct Carpatho-Rusyn people, since the mid-nineteenth century, came into being, disappeared, and then re-appeared in the wake of the revolutions of 1989 and the collapse of communist rule in central and eastern Europe.

To help guide the reader further there are 34 detailed maps plus an annotated discussion of relevant books, chapters, and journal articles.

List of Maps
List of Tables
Introduction
Chapters
1. Carpatho-Rusyns and the land of Carpathian Rus’
Human geography
No shortage of names
Physical geography
A borderland of borders

3. The Slavs and their arrival in the Carpathians
The Huns and the displacement of peoples
The origin-of-peoples fetish
Is DNA the reliable way?
The Slavs and Carpathian Rus’
Dwellings of the early Slavs
The White Croats and the Avars

4. State formation in central Europe
The Pax Romana and the Byzantine Empire
Greater Moravia
Saints Constantine/Cyril and Methodius
Christianity becomes “our” religion
Contents
Who among the East Slavs first received Christianity?
The Magyars and Hungary
Historical memory and political reality
The rise of Poland
Kievan Rus’
The Great Debate: the origin of Rus’

5. Carpathian Rus’ until the early 16th century
The formation of the Hungarian Kingdom
A medieval Carpatho-Rusyn state: fact or fiction?
The Mongol invasion and the restructuring of Hungary
The Vlach colonization
Kings, nobles, and the implementation of serfdom
Poland: administrative and socioeconomic structure
The fall of Constantinople and the decline of Orthodoxy

8. Habsburg reforms and their impact on Carpatho-Rusyns
The reforms of Maria Theresa and Joseph II
Uniate/Greek Catholics and the Enlightenment in Carpathian Rus’
Carpatho-Rusyns become an historical people

10. Carpathian Rus’ in Austria-Hungary, 1868–1914
The Dual Monarchy and Austrian parliamentarism
In search of a Rus’ national identity
The national awakening in the Lemko Region
Hungary and its magyarization policies
Magyarization despite the letter of the law
Carpatho-Rusyns in Hungarian politics
Carpatho-Rusyns and national survival
Socioeconomic developments
Was life in pre-World War I Carpathian Rus’ so destitute?

11. Carpatho-Rusyn diasporas before World War I
Migration to the Srem, Banat, and Bachka
Emigration abroad to the United States
Rusyn-American religious and secular organizations
Rejected Greek Catholics and the “return” to Orthodoxy
“You are not a proper priest”
“Ruthenians” become Uhro (Hungarian)-Rusyns, or Russians, or Ukrainians
Rusyn Americans and international politics

13. The end of the old and the birth of a new order, 1918–1919
National self-determination and socialist revolution
Rusyn Americans mobilize politically
Political mobilization in the Carpatho-Rusyn homeland
Hungary’s autonomous Rus’ Land
The Ukrainian option
The meaning of Ukraine
Carpatho-Rusyns on the international stage

15. The Prešov Region in interwar Slovakia, 1919–1938
Borders, schools, and censuses
The problem of statistics
Carpatho-Rusyns and Slovaks
Socioeconomic developments
Education
The religious question
The nationality question and cultural developments

16. The Lemko Region in interwar Poland, 1919–1938
Poland, its Ukrainian problem, and the Lemko Region
Socioeconomic status of the Lemko Rusyns
Religious and civic activity
The Lemko-Rusyn national awakening

23. The Prešov Region in postwar and Communist Czechoslovakia, 1945–1989
Postwar politics: the Ukrainian National Council
Population transfers and the UPA
Communist Czechoslovakia according to the Soviet model
Carpatho-Rusyns are ukrainianized
The Prague Spring and the rebirth of Carpatho-Rusyns
Soviet-style political consolidation and reukrainianization
Socioeconomic achievements and national assimilation

24. The Lemko Region and Lemko Rusyns in Communist Poland, 1945–1989
Poland reconstituted and reconstructed
The deportation of the Lemkos: Phase two
Greek Catholic and Orthodox Lemkos
Lemkos as Ukrainians
Lemko fear and anxiety

25. Carpatho-Rusyn diasporas old and new, 1945–1989
Soviet Ukraine (Galicia and Volhynia)
Czechoslovakia (Bohemia and Moravia)
Romania (the Banat and Maramureş Regions)
Yugoslavia (Vojvodina and Srem)
The United States
We want to know who we are

26. The revolutions of 1989
Transformation and demise of the Soviet Union
The end of Communist rule in central Europe
Carpatho-Rusyns reassert their existence
One people despite international borders
Proclamation of the First World Congress of Rusyns
The autonomy question again

29. Other Carpatho-Rusyn communities in the wake of the revolutions of 1989
Ukraine
The Czech Republic
Hungary
Romania
Yugoslavia—Serbia and Croatia
The United States
Canada

"This book is undoubtedly the work of a renowned scholar with impressive knowledge concerning the history and culture of the region. At the same time, this is also the work of an ardent advocate of a national cause (of the people inhabiting this region or having ancestral links to it). It is clear from the text that the author is well aware of the possibility of being accused of partisanship as potentially compromising the academic impartiality of his narrative. Still, Magocsi attempts to balance a critical scholarly approach (as embodied by constructivist methodology) with the primordialism of a national activist."

"Paul Robert Magocsi, Chair of Ukrainian Studies at the University of Toronto, has been writing about Carpatho-Rusyns for almost half a century now and this book represents a condensation, if not culmination, of his scholarship on the subject. For historians of the so-called stateless nations, Magocsi’s main narrative will strike a familiar chord. He tells a story of people who have existed from the ancient times under foreign powers (Hungarian for the most part) but have been inhibited from developing fully due to the lack of self-rule and governmental policies against them. With Their Backs to the Mountains will certainly prove to be a valuable book for those interested in the Carpatho-Rusyn perspective on the history of these lands by the Carpathians and the question of ethnic/national identity of their indigenous Eastern Slavs."

"The real value of With Their Backs to the Mountains is that it is a history of Carpatho-Rusyns that is not written from any state perspective, whether that of Budapest, Moscow, Kyiv, Prague, Warsaw, or Bratislava. It is not inappropriate to say that Magocsi’s history is written from the perspective of Carpatho-Rusyns, while at the time emphasizing that the book systematically analyzes historical events in an objective manner, a not unimportant characteristic of his research. Although a scholarly publication, the book has relevance in the context of present-day changes in Europe. The relevance factor applies to those states to whom the doors became open for membership in the European Union. Although not the sole reason (but nevertheless a reason) was the fact that all of those states recognized their Carpatho-Rusyn citizens to comprise a distinct ethnos. The book’s relevance factor also applies to other countries, first and foremost Ukraine, which is seeking a path to the... more

"Magocsi's book is an invaluable source of detailed information for those who are interested in a history of the Rusyns and their diaspora, for those who teach the history of East Central Europe it is also a useful textbook with helpful inserts that explain certain terms, events, and historiographical problems, and includes documents or illustrative explanations of other authors, finishing with a great bibliographic essay in the section 'for further reading'."

"Paul Robert Magocsi, a well-known author on Ukrainian History and a self-identified Rusyn, authored With Their Backs to the Mountains not only to fill a lacuna in knowledge among specialists and genealogical researchers, but also to advocate for the distinctiveness (and, indeed, existence) of an ethno-national group still struggling for recognition at home and abroad. The comprehensive book includes a wealth of illustrations, maps, and text capsules, which address thematic issues outside the immediate chronological narrative, and Magocsi’s text is certain to become the definitive reference guide to the Carpatho-Rusyns."