The Roundtable Talks of 1989

The Genesis of Hungarian Democracy 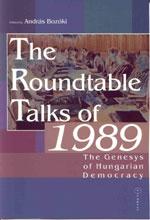 In Hungary the "velvet revolution" of 1989 was prepared, or rather prompted, by a series of negotiations conducted between representatives of the democratic opposition, the ruling Communist party, and a political group called the "third side" comprising organizations close to the Communist regime. As a result of these talks, referred to as the historic "Roundtable Talks", free elections were held in Hungary in 1990, marking the end of the oppressive Communist regime and the beginning of a new epoch in the country's history.

Based on primary sources recently published in Hungarian in eight volumes - edited by András Bozóki, Márta Elbert, Melinda Kalmár, Béla Révész, Erzsébet Ripp and Zoltán Ripp - this book tells the history of the Roundtable Talks. The contributors prove that in Hungary - as opposed to some other Central European countries - the Roundtable Talks amounted to much more than just a sideshow and in fact they constituted the hub of the revolutionary transformation.

In the first part of the book - a series of analytical essays - scholars of the Hungarian democratic transition discuss the most relevant aspects of the Roundtable Talks, the actors and organizations participating, the tactics and strategies used, institution building, the new electoral system, and constitutional reform. The Hungarian Roundtable Talks are placed into wider historical and international perspectives. In the second part, eight key documents are presented with commentaries. The book has a detailed chronology, biographies of the most important participants, and an index.

1. The Politics of the Roundtable Talks

Zoltán Ripp: Unity and Division: The Opposition Roundtable and Its Relationship to the
Communist Party

Melinda Kalmár: From ‘Model Change’ to Regime Change: The Metamorphosis of the MSZMP’s Tactics in the Democratic Transition

András Bozóki and Gergely Karácsony: The Making of a Political Elite: Participants in the
Hungarian Roundtable Talks of 1989

Ádám Masát: Beyond the One-party System: The Debate on the “Party-Law”

John W. Schiemann: The Negotiated Origins of the Electoral System

János M Rainer: Regime Change and the Tradition of 1956

Andrew Arato: The Roundtables, Democratic Institutions and the Problem of Justice

Csaba Békés: Back to Europe: The International Background of the Political Transition in
Hungary, 1988–90

András Bozóki and Zoltán Ripp: Introduction to the Documents

1. Proclamation of the Independent Lawyers' Forum to the Organizations of the Opposition (March 15, 1989)

2. Proposal of the Opposition Roundtable to the Central Committee of the Hungarian Socialist Workers’ Party, April 19th, 1989

3. Agreement on the Commencement of National Roundtable Talks (June 10th, 1989 )

5. Agreement among Members of the National Roundtable on the Thematic Structure and Schedule of the Talks (June 21st, 1989)

"...a comprehensive overview and in-depth analysis of the process of roundtable talks... a balanced and well-written contribution to the study of regime change, institution-building and elite behaviour... an essential reading for anyone interested in the process of democratisation in Eastern Europe."

"...an exceptional volume. Ably and inventively edited by András Bozóki, it consists of ten analytical chapters, a sample of key documents, a chronology of the Hungarian National Roundtable Talks, and forty-five brief yet informative biographies of the principal participants. The exceptional strength of this book is based on four pillars: (1) a comprehensive description of all the important aspects of the roundtable process; (2) ingenious analyses of several aspects (political, social, cultural, and historical) of this process; (3) several innovative theoretical contributions; and (4) a sample of the original transcripts and documents."