Reflections on the Russian soul - A Memoir 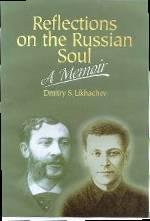 This compelling and often traumatic book is the memoir of one of the most important figures in modern Russian history, Dmitry S. Likhachev, revered as 'a guardian of national culture'. Reflections on the Russian Soul is an incredible account of an intellectual's turbulent journey through twentieth century Russia. Likhachev re-counts the fortunes of people with whom he came into contact and reproduces the air of passed years in Russia.

Likhachev vividly portrays his childhood years in St. Petersburg and continues into his student life at Leningrad State University that led to an agonizing period of imprisonment and near death. He describes how a harmless telegram caught the attention of the Secret Police, resulting in his exile and confinement within the infamous prison island of Solovky. He describes his first-hand experience of brutality in prison during the early Stalin years and the incident that not only saved him but also haunted him for the rest of his life.

He reflects on the years after his release from prison and the events leading up to the Second World War. His powerful recollection of the blockade of Leningrad provides the reader with a horrific insight into the harsh effects of war, hunger and survival. Lichachev goes on to describe post-war Russia and how his own livelihood developed from literary editor to a return to Leningrad University as Professor of History. This compelling autobiography finishes with Likhachev's poignant return to Solovky as a free man.

Foreword to the Russian Edition
Foreword to the English Edition
The House of Likhachev
The Children of M.M. Likhachev
My Childhood
The Disappearance of Katerinushka
The Petersburg of my Childhood
Kuokkala
The Crimea
A Volga Cruise, 1914
The Philanthropic Society Grammar School
K.I. May's Grammar School and Modern School
The Revolution--Outward Impressions
Life in No.1 State Printing-house
Taytsy, Olgino, Toksovo
The Lentovskaya School
Leonid Vladimirovich Georg
The University
The Red Terror
The Making of a Philosophy
S.A. Alekseyev-Askoldov
Khelfernak
The Brotherhood of St Serafim of Sarov
The Cosmic Academy of Sciences
Arrest and Imprisonment
Kem Transfer Point and the Crossing to Solovki Island
The Camp Topography of Solovki
The Scenery of Solovki
Krimkab
The Diagonal of a Child's Blanket
The Visit by Maksim Gorki and the Mass Executions of 1929
The Solovki Museum
The Solovki Theatre
Solovki People
A Few Fragments
Leaving Solovki
Zvanka and Tikhvin. Release
The Fate of My Friends after Solovki
The Repression of the '30s
The Publishing House of the Academy of Sciences of the USSR
Attempts at Writing
My Conviction Quashed
I Fail the Exams
I Leave the Academy of Sciences Press
Novgorod
The Blockade
Two Letters about the Blockade of Leningrad
Prorabotki
A Trip to Solovki in 1996
My last time on Solovki