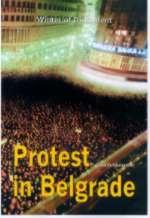 Protest in Belgrade addresses one of the most important social movements of this decade - the civil and student peace demonstrations which took place in Belgrade during the winter of 1996/97. The demonstrations, the largest ever in history, were in response to Milosevic's nullifying of the results of local elections in fourteen towns in Serbia which created global media attention and attracted worldwide sympathy.

This in-depth study on a society asking for democracy, is based on interviews with over 1000 civilians and students. The book analyses the empirical findings of the research and examines specific sociological aspects such as class/intellect composition, political/social values, reasons and objectives. A chronology of events is also included. The book deals with the various aspects of the civil and student protests and is unique because the research was carried out and completed while the demonstrations were still in progress and before the outcome of events was known.

The book provides an abundance of valuable information for analysts of post-communist transformation, researchers of social movements and social change and all those concerned with the tragic events in Southeast Europe.

Part 1: Potential for an active society,
General character of the protests and prospects for democratization,
Behavioral characteristics of the protest,
Social and political consciousness of protest participants,
'Walks' in a gender perspective

3: Protest as an urban phenomenon