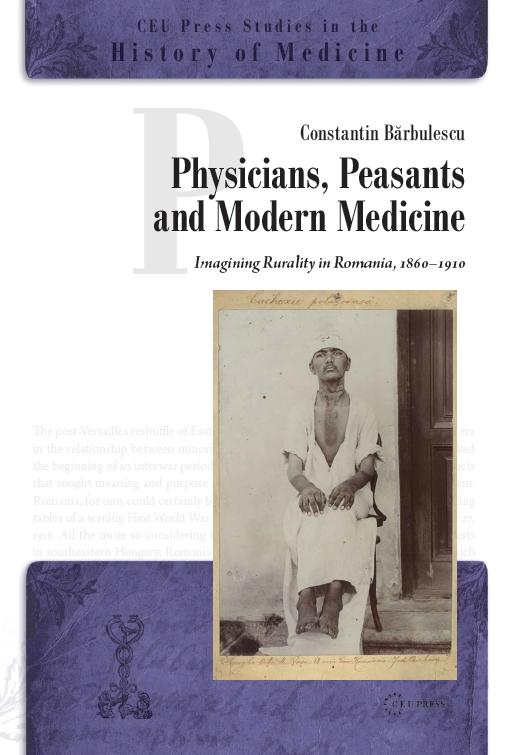 This book provides a historical narrative about Romania’s modernization. It focuses on one group of the country’s elites in the late nineteenth century, health professionals, and on the vision of a modern Romania that they constructed as they interacted with peasants and rural life. Doctors ventured out from the cities and became a familiar sight on the dusty country roads of Moldavia and Wallachia, for new health legislation required general practitioners (medici de plasă) to visit the villages in their districts twice every month. Some of them were motivated by charity, and others by patriotism, as the rural world became ever more prominent in Romania's national ideology.
Based on original research, including doctors’ public health reports and memoirs, the book describes the rural conditions in Romania between 1860 and 1910 and the doctors' efforts to improve the peasants’ way of life. The author illuminates a variety of aspects of social life based on the doctors' reports on the peasant and the rural world, including general hygiene, clothing, dwellings, nutrition, drinking habits and healing. He places official measures, laws, regulations, and modern norms about public health in the context of a broader modernizing process.

Acknowledgements
Introduction
PART ONE
Romania Through the Eyes of Doctors

PART TWO
Medical Discourse on the Peasant and the Village

1. “Thick layers of filth cover their skin”: On the Hygiene of Bodies and Clothes
The Peasant, A Being Wretched in His Body…
… And Wretched in His Clothes
2. “The majority live in worse conditions than the Zulus”: Domestic Space and Health
The Underground Hovel: The Scourge of the Rural Habitat
Overground Homes: Clay, Dung, and Straw
The “Hygienic Ills” of Rural Dwellings
3. “The peasant’s only food is mămăliga”: Food and Health
The Peasant at the Table
Mămăligă … and Again Mămăligă
The Peasant: A Reluctant Vegetarian
Mămăliga, Sloth, Illness and Death
The Good Times of Yesteryear
Our Daily Water
4. “Is the Romanian an alcoholic?”: Alcohol and Health
The Peasant and His Bottle
“Alcoholism: From Birth till Death”
The “Hazards of Alcoholism”
Against Drunkenness
5. “Pellagra, the tragedy of our peasant”: An Illness is Born
The Illness and Its Representations
An Illness of the Poor
A Sarabande of Statistics
“Pellagra: An Illness caused by Rotten Corn”
Against Pellagra
6. The “degeneration of the race and the decline of the nation”: Demography and Its Anxieties
The Beginning of the End
Degeneration, Depopulation, Antisemitism
Racial Degeneration and the Statistics of Conscription
Infant Mortality at the End of the Century

1. The Power of Medical Culture: New Laws for People Locked in the Past
For the Sake of the People’s Health: Laws, Regulations, Norms … And the Impossibility of Enforcing Them
2. Two Mid-Nineteenth-Century Case Studies: Marin Vărzaru and Stoian Buruiană
Empirics, Charlatans, and Ignorance
The New Order of Carol Davila
The Empirics and Their Remedies

"Well-documented and offering an interesting approach to a relevant, but insufficiently investigated topic pertaining to Romanian history (with relevance for anthropological research), the book of Professor Constantin Bãrbulescu brings to the attention of foreign specialists important aspects of Romanian research and will surely create bridges of debate between our cultural space and others."