One Woman in the War 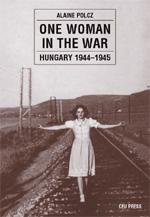 Before the publication of this book, Alaine Polcz was widely recognized as a psychologist ministering to the needs of disturbed and incurably ill children and their families, as the author of numerous articles and several books on thanatology, and as the founder of the hospice movement in Hungary.

The autobiographic account of the experiences of a woman, then 19-20, in the closing months of the Second World War. When it was first published, in 1991, the book was a revelation of past horrors in Hungary which, until then, had lingered on in the farthest reaches of the national memory as rumor and suspicion about the violent acts committed against women during a time of chaos, havoc, and savagery.

The literary world quickly recognized the merits of this book: It was highly praised by Hungarian reviewers, awarded prizes, and has already been translated into French, Rumanian, Slovenian, and Serbian.

"A woman's life at the front. Hunger, lice, digging trenches, peeling potatoes, cold, filth. This life was not only mine. My husband's white-haired mother was dragged away and raped as pubescent girls were. Russian soldiers attacked me, beat me, protected me, stepped on my hand with a boot, fed me.
What were they like? What were we like? Why did they rape women knowing they possibly would pay for it with their lives?
Not only bombs and projectiles annihilated, not only Hungarians and Germans were killed. Why did they make war? And why did we?" - the author's note to the second edition in Hungarian