The Miracles of St. John of Capistran 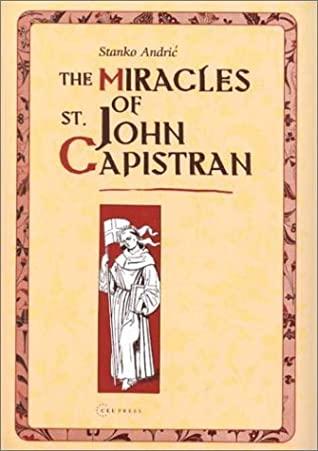 Religious history and, in particular, the history of the cult of saints and their miracles has recently become one of the most popular fields of historical investigation. Together with continuing interest in the related ecclesiastic motivations and the well organized craft of hagiography, this new interest might be explained by the marvellously rich details of thousands of witness accounts testifying to the miraculous help they received from the saint in times of desparate need. These accounts provide an unparalleled insight into the history of everyday life and into the various hardships, illnesses, hopes dreams and anxieties during the late medieval and early modern period.

Only two records exist on the history of the medieval Hungarian kingdom- the thirteenth century canonization trial of St. Margaret of Hungary and the miracle collections promoting the canonization of St. John of Capistran, the victorious Crusader at Belgrade in 1456, who died thereafter in Ilok (a city located on the periphery of western Christianity in Croatia). Based on a careful study of the widely scattered manuscripts on Capistranean miracles and with the help of a microscopic philological analysis, the author has managed to reconstruct, for the first time, one of the most complex miracle collections in the history of medieval hagiography.

Covering the recording of the first miracle series by the urban notaries of Ilok, the local hagiographer of Ilok Franciscans (John Geszti), the vicar general of the Hungarian province (Stephen Varsányi), and a number of subsequent editions and amplifications of this material recycling into the canonization campaign of St. John of Capistran and the miracles he himself recorded, The Miracles of St. John of Capistran, is an outstanding debut by a representative of a new generation of Central European medievalists.

Remark on quoting from the miracle collections

Chapter 1. The road to Ilok

The origins of the Franciscan Observance

Some elements of the Observant spirituality

The Observants in Bosnia and Hungary

The victory of Belgrade and its hagiography

Chapter 2. A portrait of the town

Chapter 3. The death and the corpse

From Belgrade to Ilok

Chapter 4. The beginnings of the canonization campaign, 1456-63

James of the Marches visits Ilok

John of Tagliacozzo again in Hungary

The miracles recorded by the committee of Ilok: N

Ia: a collection parallel to N

The contribution of Peter Soproni: Na and M

The obstacles and opponents

The end of the medieval canonization campaign

The collection Ic (end of the 15th century?)

Chapter 6. Capistran as a living miracle-worker

Capistran and Bernardine of Siena

Capistran and the value of miracles

The preaching and the miracles

Saints vs. demons and saints vs. saints

Miracle story as a narrative structure

(1) The misfortune and its circumstances

(4) The forms of imploration

(5) The role of intercessors and assistants

(6) The dynamic of the miraculous event

(7) The practices of gratitude

(9) Testification to the miracle

Chapter 8: Some historical aspects of the miracles post mortem

A typology of the miracles: between diversity and uniformity

The geographical extension of the cult

Social and gender distribution of miracles

Conclusion (Towards a unified theory of miracles)

Appendix 1: Sources for the history of Capistran's canonization campaign.

Appendix 4: Domiciles of the beneficiaries of Capistran's posthumous miracles

"Andric's chief merit is in establishing the authorship and circumstances of composition of each collection through an exhaustive analysis of the manuscripts and an examination of their textual relationship. With great erudition, he takes the readers through his reasoning step by step, giving detailed proofs both in the text and in ample appendixes."

"...an important contribution to Hungarian social history, but also of value for the detailed analysis of the texts, many of which are published for the first time in an appendix."

"In 1462 Matthias Corvinus wrote to Pius II about a problem in the Hungarian kingdom surrounding the late Observan Franciscan preacher John Capistran (1386-1456). Corvinus noted the friar was being venerated as a saint. Something was amiss. Either common people were damned in ignorance or Capistran was being denied due honor. Pius did nothing, then promptly died. A decade passed. Elizabeth Szilagyi, widow of John Hunyadi, again addressed the pontiff, this time Sixtus IV, with an urgent message that Capistran continued posthumously to "preach with his miracles" and should be canonized. ... Capistran had been a healer, raiser of the dead, controller of weather, visionary, prophet, exorcist, veterinarian, crusader, and general thaumaturge. ... A movement for canonization began upon his death; yet his postmortem miracles surpass even those in vita. In the fifteenth century, as many as 500 miracle stories may have been catalogued, but not everyone was impressed. ...... more

"Andric bring to his topic not simply a detailed knowledge of the local setting but also a keen command of the medievalist's fundamental tools... His reconstruction of the dates and circumstances of composition of these core sources is entirely convincing, and no future scholar writing about St. John Capistran will be able to (or want to) ignore Andric's work... it is a fundamental study (one is tempted to say the fundamental study) of Capistran's cult in the fifteenth and sixteenth centuries..."