The Meaning of Liberalism 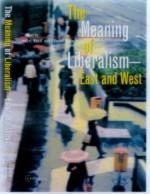 The Meaning of Liberalism provides a new perspective on the continuing debate about how liberalism should be defined and what it means in countries with an established parliamentary system, particularly in the new democracies of Central and Eastern Europe.

The key question this book addresses is: will the specific experience of communism and its aftermath give birth to a new distinct current of liberal thought, or will it simply enlarge the scope of the Western liberal debate? The authors argue that liberalism cannot be reduced merely to private property and market prices, but needs a very complex set of institutions and corresponding law.

Contributors come from both sides of the former Iron Curtain and they highlight the richness and diversity of liberalism and discuss different perceptions of liberal thinking in the East and West in the post-modern world.

Part 2. Liberalism in the West: Limits & the crisis of liberal politics, Social & cultural problems in contemporary Europe, Two dilemmas of liberalism, Above all we must protect the civil roof, German difficulties with liberalism