Life Should Be Transparent

Conversations about Lithuania and Europe in the Twentieth Century and Today 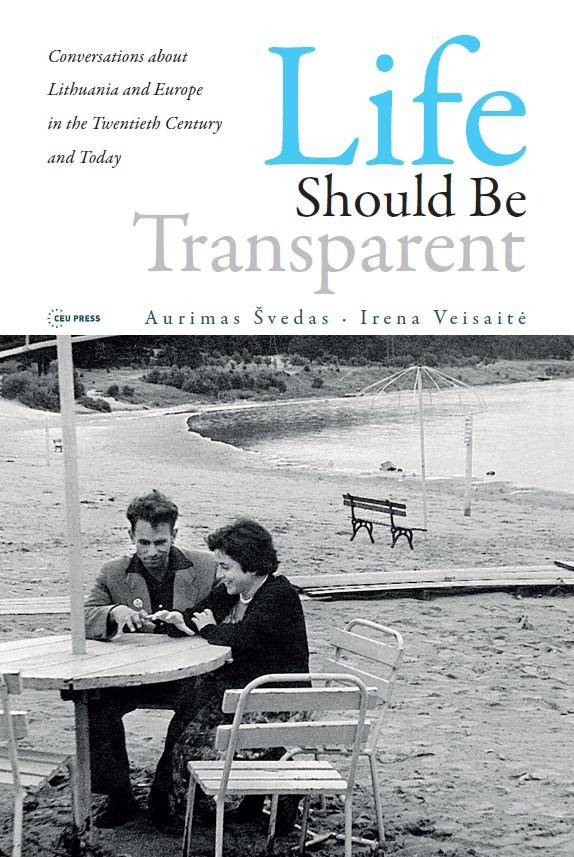 This book of thirteen conversations introduces us to the life of an exceptional person—theatre critic, Germanist, and long-time chair of the Open Lithuania Fund board—Irena Veisaitė. The dialogue between Lithuanian historian Aurimas Švedas and a woman who reflects deeply on her experiences reveals both one individual’s historically dramatic life and the fate of Europe and Lithuania in the twentieth century.

Through the complementary lenses of history and memory, we confront with Veisaitė the horrific events of the Holocaust, which brought about the end of the Lithuanian Jewish world. We also meet an array of world-class cultural figures, see fragments of legendary theatre performances, and hear meaningful words that were spoken or heard decades ago.

This book’s interlocutors do not so much seek to answer the question “What was it like?” but instead repeatedly ask each other: “What, how, and why do we remember? What is the meaning of our experiences? How can history help us to live in the present and create the future? How do we learn to understand and forgive?”

A series of Veisaitė’s texts, statements, and letters, presented at the end of the book suggest further ways of answering these questions.

In Lieu of an Epilogue: More and More Questions, But Fewer and Fewer Answers

Appendices—Voices from the Past
Appendix I: What questions matter the most to me now?
High School QuestionnaireAppendix II: Texts and Statements
Review: "Measured Optimism"
"Left Unsaid"
"The Holocaust in My Life"
"Does Litvak Culture Have a Future on Lithuanian Soil?"
Appendix III: Letters
Appendix IV: Post Scriptum
"On Memory and Remembering"
"An Important Meeting"
"The Debate about Our People"
Key Biographical Events
Index

"The 13 conversations between Veisaite and Lithuanian historian Aurimas Svedas are far-reaching and memorable, covering Veisaite’s rich and varied life, taking in the horrific events of the Holocaust, which brought about the end of the Lithuanian Jewish world. We also meet an array of cultural figures and experience fragments of theatre performances that moved her. Veisaite and Svedas have a close bond and the experience of recording Veisaite’s memories prompts them to explore in detail the nature of memory itself — “What, how and why do we remember? What is the meaning of our experiences? How can history help us to live in the present and create the future?” At 92, Irena Veisaite is able to supply plenty of raw material for this discussion."

"Aurimas Švedas has produced what can be called a historical document about one of the few transgenerational and transformative personalities of twentieth-century Lithuania, Irena Veisaitė. Life Should Be Transparent is neither a memoir nor a biography, portraying one of the most intriguing Germanists, theater critics, and pedagogues still alive. In 13 sympathetic interviews, Švedas, the foremost historian of modern Lithuanian culture, has provided a history of twentieth-century Lithuania from the point of view of a frightened young girl maturing through life into an old woman whose memories may soon fade. He gives the reader a remarkable insight into the different epochs she lived through, most notably her survival of the Holocaust and the Soviet occupation. Švedas and Veisaitė are kindred spirits seeking the meaning of life and a way to authenticity."

“Unforgettable scenes of twentieth century Lithuanian history are revealed here—Jewish and Lithuanian interwar Kaunas, the cruel realities of the war and the Holocaust, rescue and rebirth. This important cultural critic’s epic story is neither monograph nor textbook, but rather an opportunity to touch the past.”

“This book of extended conversations is mandatory reading for anyone interested in the last decades of Lithuanian history. One of Lithuania’s most enlightened individuals, Irena Veisaitė is the embodiment of tolerance and common sense. Her focus is culture, and especially theatre and cultural opposition during the Soviet era. She explores these questions with great wisdom, always avoiding extremes and superficiality as she delves into complex philosophical issues.”