The Jews of Europe in the Modern Era 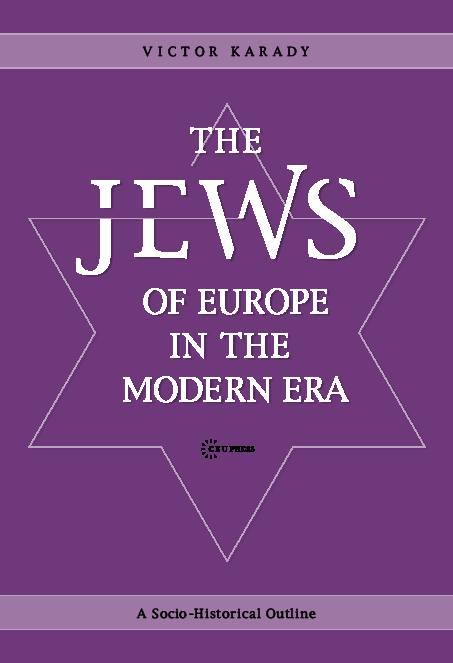 Discusses the socio-historical problem areas related to the presence of Jews in major European societies from the 18th century to our days; differently from most other studies, covers the post-Shoah situation also. The approach is multi-disciplinary, mobilizing resources gained from sociology, demography and political science, based on substantial statistical information.

Presents and compares the different patterns of Jewish policies of the emerging nation states and established empires. Discusses education and socio-professional stratification of Jews. Deals with the challenges of emancipation and assimilation, the emergence of Jewish nationalism in various forms, Zionism above all, as well as antisemitic ideologies. The book ends with a scrutiny of post-Shoah situation opposing in this regard Western Europe to the Sovietised East, discussing finally strategies of dissimulation or reconstruction of Jewish identity.

The Diaspora in Europe and the world in numbers
Beginnings of ‘strategic’ migrations in the modern era and the immigration into Hungary
The logic of the East–West migratory movements
‘Overurbanization’
Residential differentiation, segregation and urbanization
‘Demographic transition’ and modernization
Social circumstances of rapid demographic modernization
Demographic consequences of renouncing religious affiliation
Heterogamy and de-Judaization
Dismantling of feudalism as a liberating process
Historical antecedents of economic modernization: exclusion and its compensation
Religious intellectualism and economic modernization
Collective dispositions and group identity as economic capital
External socio–historical conditions of restratification
General features of economic modernization: self-sufficiency and urban concentration
Free-market propensities and entrepreneurial flair
Reproduction of intermediary functions in commerce and finance
Specialization and capital concentration in commerce and credit
Archaism and modernization in industry
Traditionalism and restratification in intellectual occupations
Cultural capital and the ‘dual structure’ of intellectual markets
The cultural industry, assimilation, and intellectual achievements
Social circumstances of Jewish ‘overeducation’
‘Overeducation,’ assimilation and strategies of integration
Assimilatory pressure and the influence of cultural heritage on restratification within the intelligentsia
Assimilationist compensation and creativity

Chapter 2 The Challenge of Emancipation. Jewish Policies of the New Nation-States and Empires (18th–19th centuries)

Circumstances of political renewal
Modernization programs affecting the Jews
Post-feudalistic sources of the ‘Jewish Question’
Social circumstances of (near-) unconditional emancipation and integration in the West
Denominational components of integration and emancipation in the West
Local approaches to integration in the West
‘Enlightened’ absolutism, or historical antecedents of the modern ‘Jewish policy’ of Central European powers
Seeds of absolutist emancipation and Jewry in the Habsburg Empire
Aufklärung, Haskalah and ‘conditional emancipation’ in the German world
Haskalah and modalities of national assimilation in the Austrian Monarchy
Hungary and the Balkans: more or less successful examples of national integration
Political sources of the rejection of emancipation in Russia and Romania
Integration and exclusion under Russian absolutism
Pogrom policy and state anti-Semitism at the end of the tsarist régime
Emancipation and forced assimilation after 1917: the ordeals of the Russian Civil War and Bolshevik dictatorship
United Romania, or a case study in Judaeophobic nation-building

Chapter 3 Identity Constructions and Strategies since the Haskalah.
Assimilation, its crises and the Birth of Jewish Nationalisms
Inherited group identity and the challenge of assimilation
Concomitants of the new identity strategies
Assimilation as an impossible undertaking
Paradigms of rapprochement: acculturation and ‘adoptive nationalism’
Religious indifferentism and religious reform
Factors influencing social integration and ‘counter-assimilation’
Modernization of society at large and chances of assimilation
‘Counter-assimilation’
Self-denial and conversion: a forced path of assimilation
Conversion, mixed marriage, ‘nationalization’ of surname
Crisis of assimilation as a psychic disturbance and traumatic experience
Other pathologies of assimilation: dissimulation, compensation and dissimilation
The crisis of assimilation and the nationalist responses
Main socio-historical dimensions of Jewish nationalism
Intellectual forerunners of Zionism
‘Lovers of Zion,’ or the ‘practical Zionists’
Establishment of political Zionism and its initial dilemmas
The ideological complexion of Zionism and the ‘Zionist synthesis’
The organization of Zionism in Europe
The anti-Zionist camp and its points of reference
Emigrants and those taking the path of aliyah
The ideological spectrum of the Zionist movement
The Zionist extreme left and extreme right
Cultural autonomism, or the liberal branch of Jewish nationalism
The Jewish Socialist movement in Eastern Europe

Chapter 4 The Road to the Shoah. From Christian Anti-Judaism to Radical Anti-Semitism

Making sense of nonsense
The logic of stigmatization and the Christian precedent
Anti-Semitism as a self-inducing and self-fulfilling prophecy
Functional models of modern anti-Semitism: the code of negativity and symbolic violence
Anti-Semitism as a compensatory mechanism for social disadvantage
Scapegoating, occupational competition and class rivalries
Anti-Semitism and conflicting political interests
Mechanisms of ‘poor concertation’ and ‘Jewish conspiracy’
Anti-Semitism as anticapitalism
Judaeophobia and romantic nationalism
Intellectual sources of the ideology of ‘rootedness’
The ‘Aryan myth’ and early versions of racial doctrine
Chamberlain, the father and high priest of anti-Semitic racial doctrine
Forms and historical dimensions of anti-Jewish violence in the recent past
The revival of political anti-Semitism in Eastern Europe
Two ‘liberal’ counterexamples: France and Hungary
Austria from von Schönerer and Lueger to the Anschluss
German imperial anti-Semitism from court chaplain Stöcker to Hitler
The rise of Nazism and the road to the Shoah
The implementation of the genocide

Survivors of the Shoah, or the impossible return
Trauma of survival and painful ‘liberation’
Exodus and the questionable ‘new start’ in sovietized Eastern Europe
People of the Shoah
Israel and the new Jewish identity
Religious indifferentism and ‘re-Judaization’
Hostages of Cold War in the Soviet Union
Remnant Jews and new fangled anti-Semitism in the Soviet satellites
Anti-Semitism in the West, new and old: a changing balance of forces to fight it New conditions of social integration in the East and West
Communism and Jewry
Concluding remarks

"Karady's book cogently analyzes the structural transformations of European Jewry from the 18th century to the present, with data drawn from cases as disparate as liberal England and Bolshevik Russia. The book's four long chapters examine demography and social stratification, Jewish emancipation, identity strategies after the Haskalah, and antisemitism and the Shoah; a long epilogue ties together these themes for the era after 1945. Lucidly written and well translated, Karady's book offers many important insights into the main historical processes and structures of the modern era."