Hot Books in the Cold War 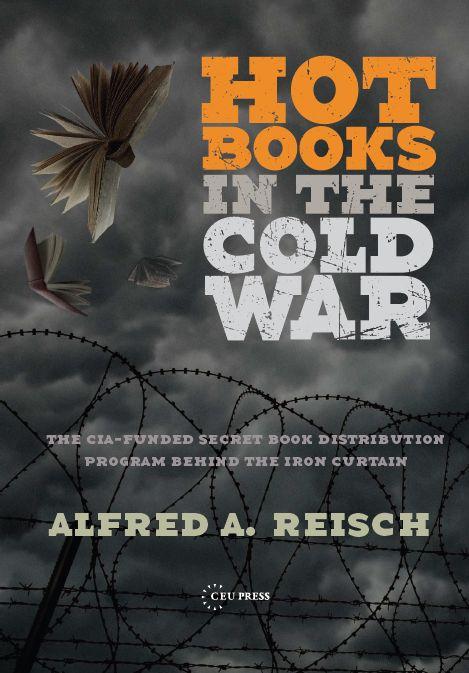 This study reveals the hidden story of the secret book distribution program to Eastern Europe financed by the CIA during the Cold War. At its height between 1957 and 1970, the book program was one of the least known but most effective methods of penetrating the Iron Curtain, reaching thousands of intellectuals and professionals in the Soviet Bloc. Reisch conducted thorough research on the key personalities involved in the book program, especially the two key figures: S. S. Walker, who initiated the idea of a “mailing project,” and G. C. Minden, who developed it into one of the most effective political and psychological tools of the Cold War.

The book includes excellent chapters on the vagaries of censorship and interception of books by communist authorities based on personal letters and accounts from recipients of Western material. It will stand as a testimony in honor of the handful of imaginative, determined, and hard-working individuals who helped to free half of Europe from mental bondage and planted many of the seeds that germinated when communism collapsed and the Soviet bloc disintegrated.

Chapter 1. Origins, Objectives, and Launching of the Book Project Under Sam Walker
Chapter 2. Titles, Contents, Numbers, Targets, and Aims of the Mailings
Chapter 3. The Man in the Grey Suit. George C. Minden and his Concept of Cultural and Ideological Competition
Chapter 4. The New York Book Center. Books, Books, and More Books…
Chapter 5. The Book Project Reaches New Heights. The Golden Age of the 1960s
Chapter 6. Western and Émigré Books and Periodicals Published with Covert Support
Chapter 7. New Opportunities Through East-West Contacts
Chapter 8. The Early 1970s. The International Advisory Council
Chapter 9. A Lasting Enemy
Part I: The Censors 1956 to 1968
Part II: The Censors 1969 to 1973
Chapter 10. The Communist Regimes on the Defensive: Criticisms, Warnings, and Attacks
Chapter 11. The Person-to-Person Distribution Program: A Direct Way to Reach East Europeans. The Early Polish Program 1958–1959
Chapter 12. Another Vehicle for Reaching the People of Eastern Europe: the Person-to-Person Distribution Program and Personalized Mailings
Chapter 13. The Most Important Book Distribution Point: Vienna
Chapter 14. Letters from Poland, the Crucial Country
Chapter 15. Letters from Czechoslovakia Before and After 1968
Chapter 16. Letters from Hungary Under Goulash Communism
Chapter 17. Letters from Romania Under the Ceauşescu Regime
Chapter 18. Letters from Bulgaria Despite Very Strict Censorship
Chapter 19. The Last Seventeen Years: International Literary Centre, Ltd., East Europe, and the USSR
Conclusion The Impact of the Book Distribution Project and its Contribution to the Ideological Victory of the West

"The study reveals a treasure trove of letters from grateful book recepients in Eastern Europe. The Hungarian poet József Tornai called the books 'heavenly manna for our starved thought'. Smuggled books quickly became hot commodities, as one Pole explained: 'Books we receive from our friends are never considered our exclusive property' ... The study encourages further research into the intellectual contacts during the Cold War and should be read by librarians and scholars everywhere to remind us of the value of the written word."

"Somehow Reisch has managed to cobble together a compendium of historical substance while at the same time making it highly readable. Whenever this reviewer dipped in, he found himself fascinated and intrigued by what he found there. And as a history-of-the-book person, he was very much impressed by the physical product from the Central European University Press and its Hungarian printer. The book is solidly bound in an arresting black cloth with author and title starkly displayed on the spine in contrasting white; features a congenial typeface; and boasts a satisfying page format."

"Hot Books in the Cold War should be required reading for all students of the history of Cold War because it documents the war of words, in which printed culture was chosen to combat the brutality of cultural deprivation enforced by totalitarian political censorship."

"The late Dr. Reisch, himself a CIA employee and devoted participant in this effort, has summarized in exhaustive detail the numbers of publications, their typical titles and authors (from J. D. Salinger to Friedrich Hayek), the regions to which they were sent, the means by which they were delivered, and the diffi culties encountered along the way. This book tells one compelling tale in the history of a generation that valued intellectual sophistication or “culturedness” in both east and west to the point that this quality was viewed as a viable tool in the defense of American national security. That generation is quickly disappearing from our midst even as the CIA has branched off from its original Cold War role in gathering and disseminating information to a more militarized identity with its expansion of drone warfare."

"Drawing on records from the United States, Hungary and Poland, as well as interviews with former book distributors and other CIA veterans, Reisch has produced the most comprehensive assessment now available of the CIA's book distribution programme."

"The CIA-funded book program strengthened the positive forces of nationalism and helped maintain the spirit of independence which ultimately overcame the foreign-imposed regimes. Alfred Reisch’s groundbreaking work sheds light on this little known effort. History shows that those who print and distribute books work for progress and enlightenment, while those who burn books will also burn people."

"Scholars of the Cold War and Public Diplomacy, as well as the general public, should welcome publication of this book which is the first detailed account of a previously little- known cultural program of the United States that helped to win the Cold War. Written by an insider who worked on the program at the time, it relates how Western books breached the Iron Curtain."