The Deeds of the Princes of the Poles 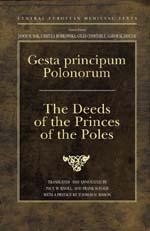 Written around 1112-1116, The Deeds of the Princes of the Poles is the oldest narrative source from Poland, formerly attributed to 'Gallus,' a French monk. The anonymous author tells the ancient history of Poland down to the reign of Boleslaw III. The chronicle contains valuable information on Poland's relations to her neighbors as well as the political ideas of his time.

After years of detailed and meticulous work by a team of historians, editors and translators, a bilingual edition of The Deeds of the Princes of the Poles (Gesta principum Polonorum), a major (indeed, unique) literary source for the history and society of early Poland, has now been published. The readable modern English-the first translation into that language--is a faithful equivalent of the Latin text, which is as accurate and authentic as modern scholarship can establish.

Generations of Polish school-children have learned about the Gesta of the nameless Frenchman, Gallus Anonymus, whose identity, however, has lately been disputed. The introduction and notes to this volume seek to provide the interested reader and the scholar with all relevant background information about this chronicle.

But the most important is the text itself in two languages:

Introduction (in cooperation with Wojciech Polak)
Manuscripts and editions
Title, author, and date of composition
Genre, structure, form, and style
Sources
The GpP as historical source
Lordship, land, and the course of history
The influence of the GpP on Polish history-writing
Editorial principles

"The translation must rank as a major achievement, especially when keeping in mind the Gesta's occasionally obscure or ungrammatical Latin, and is accompanied by a very thoughtful set of notes, and a perceptive and helpful introduction, which summarizes historiographical debates about the Gesta's author and date of composition with admirable clarity."

"In the thirteenth century Vincent Kadlubek added a variety of wholly legendary accretions to the Gesta that held the field as the chief authority on ancient Poland until the very end of the eighteenth century, when the comparative simplicity of the rediscovered Gesta (or the Gallus Anonymus, as it was then) seemed to guarantee a romantic authenticity. The byways of research that followed on that rediscovery have not hitherto attracted much attention in the Anglophone world, any more than has the Gesta itself. This splendid new volume will, however belatedly, offer a remedy."

"The translators have succeeded well in their stated task of keeping as close as possible to the 'style and wording of the original, while still offering a readable and idiomatic English version'. While employing a translation method that is not a slave to literalness they have escaped the distortions and anachronisms that often befall such an open approach. Good defenses are provided for translations of passages that are difficult or that have significant ambiguity or possible dual interpretations. The reader who must rely solely on the English will appreciate the readable, naturally flowing language and the assurance that it does not sacrifice the meaning of the original. ... Probably the most important aspect of this book is its very appearance. As the first complete translation of the Gesta into English it opens up the traditions of these manuscripts to a very broad audience and will assuredly make a heretofore potential audience aware of the existence of this... more

"CEU has done a great service in making this very important but rarely read text available in English. The core of the volume, the translation itself, is sound. The English is very readable, lively, and engaging. The Latin author's own prose style is remarakbly consistent; the transaltion is likewise smooth and correct"