The Deeds of the Hungarians 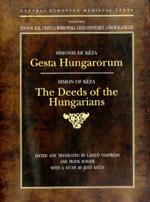 Simon of Kéza was a court cleric of the Hungarian King, Ladislas IV (1272-1290). He travelled extensively in Italy, France and Germany and culled the epic and poetic material from a broad range of readings.

Written between 1282-1285, the Gesta Hungarorum is an ingenious and imaginative historical fiction of prehistory, medieval history and contemporary social history. The author divides Hungarian history into two periods: Hunnish-Hungarian prehistory and Hungarian history, giving a division which persisted in Hungary up to the beginnings of modern historiography.

Simon of Kéza provides a vivid retelling of the well known Attila stories, using such lively prose as - ".the battle lasted for 15 days on end, Csaba's army received such a crushing defeat that very few of the Huns or the sons of Attila survived, the river Danube from Sicambria as far as the city of Potentia was swollen with blood and for several days neither men nor animals could drink the water."

The book is also significant because of the author's legal-theoretical framework of corporate self government and constitutional law, inspired by French and Italian sources and practice, which made this chronicle become an integral part of Hungarian historiography.

The background: The emergence of  a European Structural Unity
A New Historical Frame of Reference: The Nation
Simon's Social Theory: The Origins of Human Inequality
The New Centre of Political Thought: The Communitas
Two Authors, Two Histories within One Europe

Simon of Keza [The Deeds of the Hungarians]

"This handsome volume is a useful addition to the steadily growing number of works pretaining to East-Central Europe..."