Denial and Repression of Antisemitism 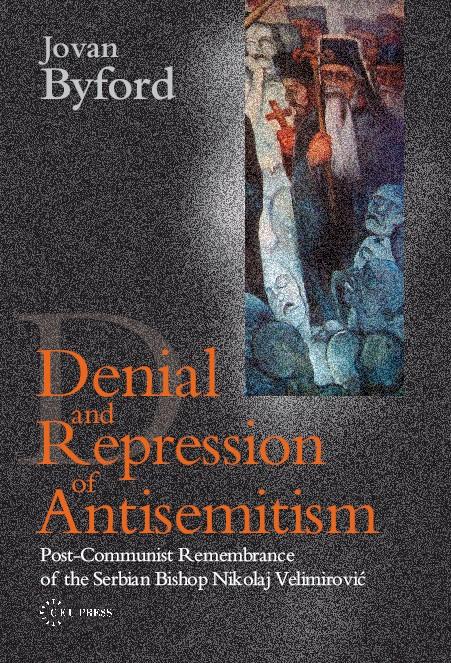 Bishop Nikolaj Velimirović (1881–1956) is arguably one the most controversial figures in contemporary Serbian national culture. Having been vilified by the former Yugoslav Communist authorities as a fascist and an antisemite, this Orthodox Christian thinker has over the past two decades come to be regarded in Serbian society as the most important religious person since medieval times and an embodiment of the authentic Serbian national spirit. Velimirović was formally canonised by the Serbian Orthodox Church in 2003.

In this book, Jovan Byford charts the posthumous transformation of Velimirović from ‘traitor’ to ‘saint’ and examines the dynamics of repression and denial that were used to divert public attention from the controversies surrounding the bishop’s life, the most important of which is his antisemitism. Byford offers the first detailed examination of the way in which an Eastern Orthodox Church manages controversy surrounding the presence of antisemitism within its ranks and he considers the implications of the continuing reverence of Nikolaj Velimirović for the persistence of antisemitism in Serbian Orthodox culture and in Serbian society as a whole.

This book is based on a detailed examination of the changing representation of Bishop Nikolaj Velimirović in the Serbian media and in commemorative discourse devoted to him. The book also makes extensive use of exclusive interviews with a number of Serbian public figures who have been actively involved in the bishop’s rehabilitation over the past two decades.

Chapter One: Introduction
Materials Used In The Study

Chapter Five: ‘He Was Merely Quoting The Bible!’: The Denial Of Velimirović’s Antisemitism
Rising Above The Criticisms: Refusal To Engage In Controversy As A Form Of Denial
‘Tiny Mosquitoes’ And The Mighty ‘Eagle’: Who Has The Right To Remember Nikolaj Velimirović?
The Letter From ‘A Jewish Woman’: Bishop Nikolaj As The Saviour Of Jews
The Two Kinds Of Antisemitism: The Rhetoric Of Interpretative Denial
Repeating The Word Of God: Authority Of The Gospels And The Reification Of Antisemitic Discourse
‘Then we are all antisemities!’: ‘Anti-judaism’ and Orthodox Christian identity
Questionable Boundaries Between Anti-Judaism And Antisemitism
Deicidal Justification Of Jewish Suffering: Holocaust As Divine Retribution

Chapter Six: Antisemitism As Prophecy: Social Construction Of Velimirović’s Sanctity
The First Stage Of The Campaign For Canonization: The Making Of A Religious ‘Cult’
Canonization In The Orthodox Church And The Need For Divine Confirmation Of Sanctity
Finding The ‘Right’ Miracle: Incorruptibility Of Remains And Miraculous Icons
The Bishop Who Came ‘Face To Face With The Living God’: Velimirović And The Miracle Of Epiphany
Velimirović As A ‘Prophet’: The Construction Of The ‘Serbian Jeremiah’

"It is hard to believe that there are almost no scholarly works on such an important and controversial figure. Therefore, the appearance of Jovan Byford's book is a welcome and timely contribution. A native of Serbia trained as a psychologist, Byford conducted interviews and drew on the secondary literature of his profession to create this unique study of the psychological operations behind the making of Velimirović's cult. Byford meticulously demonstrates the textual, rhetorical, and argumentative tactics employed by the promoters of Velimirović's cult to repress, deny, or justify Velimirović's antisemitism."

Journal of Politics and Religion

"This book provides an authoritative vivisection of the goals, behavior, and strategies of the Serbian Orthodox Church, and sheds light on the chuavinism behind the myths of martyrdom. Byford's claims and conclusions are well supported by strong evidence, most of which comes from Church sources and Velimirović's own works. No serious student of Serbia should miss this impressive book."