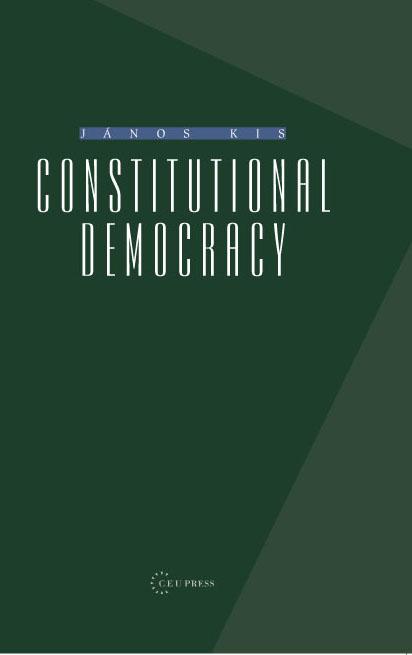 Constitutional democracy addresses the widely held belief that liberal democracy embodies an uneasy compromise of incompatible values: those of liberal rights on the one hand, and democratic equality on the other. Liberalism is said to compromise democracy, while democracy is said to endanger the values of liberalism. It is these theses that János Kis examines and tries to refute.

The volume is composed of three parts. Part One, "Public Good and Civic Virtue", revisits the debate between liberals and democrats on how to interpret the democratic vote. In Part Two, "Liberal Democracy", the author proves that on the level of principles there is no incompatibility between liberalism and democracy and that liberal theory can demonstrate that democratic values follow from fundamental liberal values. In Part Three, "Constitutional Adjudication in a Democracy", the compatibility of democracy and judicial or constitutional review is analyzed and a theory of constitutionalism is outlined.

This volume appeals to scholars in political philosophy, political science, and constitutional law, but is also recommended to all those interested in liberal and democratic theory, and the transition to democracy in Central and Eastern Europe.

János Kis was a leading intellectual of the democratic opposition in Hungary in the 1970s and 1980s. In 1973 he was dismissed from his job as a researcher at the Institute of Philosophy of the Hungarian Academy of Sciences for co-authoring a book on Karl Marx's conception of socialism, and was banned from academia until 1989. He was co-founder and first chairman of the Alliance of Free Democrats, Hungary's liberal party. His main professional interests are in moral and political philosophy and in democratic theory.

THE COMMON GOOD AND CIVIC VIRTUE

LIBERAL DEMOCRACY AGAINST THE COMPROMISE THESIS

1. Introduction
2. The Conflict
3. Constitutional Constraints, Constitutional Review
4. Political Equality and Rule by the Majority
5. Equality of Votes and Equality of Voters
6. Contractarian Theory: the Selection of Voting Rules
7. A Weakness of Contractarian Theory
8. The Typology of Preferences
9. Filtering the Preferences of the Contracting Parties
10. Moral Discussion before the Contract
11. The Mandate of the Guardians of the Constitution
12. Summary and Restrictions

1. Introduction
1.1. Two Conceptions
1.2. Questions of Principle and Questions of Regulation
1.3. The Means of Judicial Interpretation of the Constitution
1.4. A Brief Overview of What Follows

THE LEGACY OF THE FIRST HUNGARIAN CONSTITUTIONAL COURT

1. The Interpretive Practice of the Constitutional Court
1.1. The Self-understanding of the Court: Substantive Reading
1.2. Critical Reading: the Abolition of Death Penalty
1.3. Strict Textualism. the Issue of the Legal Status of Fetuses
1.4. A Shift in Self-understanding: Transitional Justice
1.5. The Decline of Rights Adjudication
1.6. The Upsurge of Welfare Protection
1.7. The Paradoxes of Welfare Protection

2. Summary and Glance to Future
2.1. Theses
2.2. Measuring the First Constitutional Court by our Theses
2.3. From ‘Legal Revolution’ to the ‘Consolidation of the Rule of Law’

"This book deserves a wide audience among political theorists and scholars of constitutional law. Highly recommended."

"It is a wide-ranging, largely philosophical, enquiry ... it holds useful lessons for politicians and constitutional lawyers beyond the borders of Hungary."